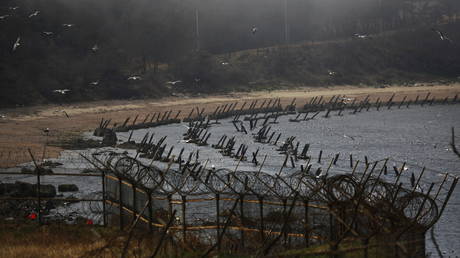 FILE PHOTO: Anti-landing spikes placed by South Korean military are seen during low tide on the beach on the island of Baengnyeong which lies on the South Korean side of the Northern Limit Line (NLL) in the Yellow Sea April 13, 2014. ©  REUTERS/Damir Sagolj

On Monday, South Korea expanded the search for the body of its official killed by North Korean troops at sea last week, and urged that a hotline with Pyongyang be restored to prevent such incidents.

At least six aircraft and 45 vessels are participating in the search for the body of the South’s fisheries official killed by the North’s military, including 36 ships from the coastguard and navy. Nine boats from the fisheries ministry and others in private ownership are also taking part.

The expansion of the search operations comes a day after Pyongyang accused Seoul of intruding into its territorial waters while searching for the body. North Korea said it was conducting its own search for the man’s remains, stressing that it was considering ways to hand them over to the South, if found. (RT)