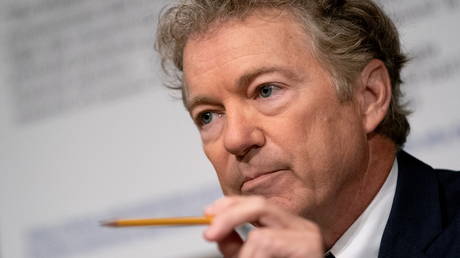 FILE PHOTO: US Senator Rand Paul is shown at a Senate hearing in July in Washington. © Reuters / Stefani Reynolds

US Secretary of State Antony Blinken’s attempt to evade questions about a drone strike that allegedly killed a Kabul aid worker backfired, as Senator Rand Paul pointed out that the target should have been known before the attack.

Pressed by Paul (R-Kentucky) on whether the August 29 strike killed an aid worker or an ISIS-K operative, Blinken testified in a Senate hearing on Tuesday that the Biden administration is reviewing the incident, and “a full assessment will be forthcoming.”

Paul then stung Blinken with the obvious, saying, “Well, see, you’d think you’d kind of know before you off somebody with a Predator drone whether he’s an aid worker or he’s an ISIS-K.” He added that the US has a recent history of drone strikes with unintended casualties, including “hundreds and hundreds of people” who were killed remotely by the Obama administration, and civilian casualties lead to “blowback.”

“I don’t know if it’s true, but I see these pictures of these beautiful children that were killed in the attack,” Paul said of reports that seven children and three other people were also killed in the drone strike. “If that’s true, and not propaganda, guess what, maybe you’ve created hundreds or thousands of new potential terrorists from bombing the wrong people.”

The New York Times said on Friday that its investigation of the incident found that the drone strike took out an aid worker and the children who came to greet him – not an ISIS-K terrorist with a car bomb, as the Pentagon had claimed. The newspaper found, too, that contrary to US government claims, there was no evidence of “secondary explosions” to suggest that the car was rigged with explosives. The worker, Zemari Ahmadi of US NGO Nutrition & Education International, had loaded containers of water in his car. (RT)