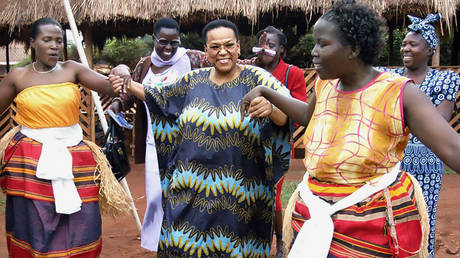 The ‘curvy, sexy’ women of Uganda are set to be promoted as an attraction for visitors to the African nation. But the tourism minister who came up with the idea is now facing calls to resign from local feminists.

Uganda already boasts stunning scenery, national parks, and a wide variety of wildlife. But Minister for Tourism Godfrey Kiwanda announced a new initiative to get more people to visit the country – the ‘Miss Curvy Uganda’ beauty pageant. He hopes it will help increase the influx of visitors and tourist dollars.

Flanked by a small army of curvaceous women around the swimming pool of a Kampala hotel for the pageant’s launch, Minister Kiwanda told the Daily Monitor: “We have naturally endowed, nice-looking women that are amazing to look at. Why don’t we use these people as a strategy to promote our tourism industry?”

Due to take place in June, the pageant’s organizer, Ann Mungoma, said it will “bring out the endowment of the real African woman,” showcasing both their “beautiful curves and intellect.”

Not everyone agrees, however. Uganda’s feminists have struck back at the event, saying it demeans and objectifies women. They have called on Minister Kiwanda to step down.

The two hosts of popular Ugandan morning radio show Gaetano & Lucky In The Morning locked horns in a vigorous debate over the pageant, with the female host Lucky slamming it as a “lazy way of thinking,” and wondering whether her co-host Gaetano would be willing to ‘sell’ his sister this way. He tried to parry the question by saying the event actually promotes diverse beauty (which is also the line taken by the pageant’s organizer) and noting that many other countries already have similar events.