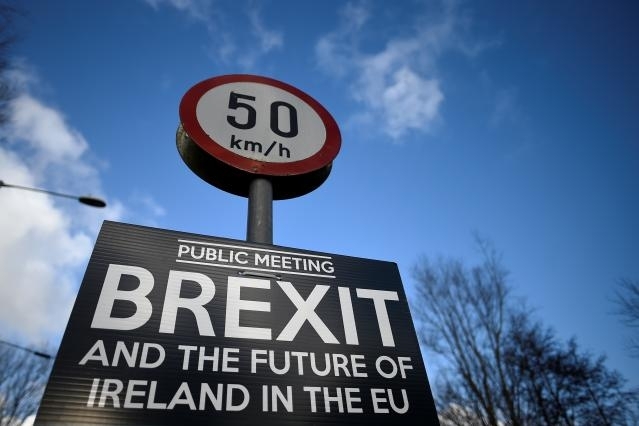 European Union negotiators see the outline of a compromise on the Irish border issue which is holding up Brexit talks, EU sources told Reuters on Thursday, raising hopes that a new British offer could unlock a deal.
Prime Minister Theresa May has promised new proposals and sketchy details seen so far have found a tentative welcome in Brussels as the sides push for a deal with 176 days to Brexit.

“This is a step in the right direction,” said one EU source close to the negotiations. “It makes finding a compromise possible.”

A second source said EU negotiator Michel Barnier was looking at where the bloc could make improvements to what it has offered London as both sides race to overcome the remaining obstacles to a Brexit deal before a high-stakes EU summit on Oct. 17-18.

“We are definitely engaging with Britain” on ways to break the deadlock over what is known as the “Irish backstop”, said an EU diplomat following the negotiations.

Barnier himself said negotiations were in their final stages and the EU was working “hand-in-hand” with the Irish government.

“To agree to any deal, we need to have a legally sound backstop solution for Ireland and Northern Ireland,” Barnier said after meeting Irish Prime Minister Leo Varadkar.

Britain has yet to formally deliver its new ideas, Varadkar said, notably about a fall-back option to keep the whole of the United Kingdom in a customs union with the EU.

Varadkar said Dublin was open in principle to anything that helps escape extensive Irish border checks but voiced caution on an all-UK customs union, which the EU has once rejected before.

The EU is insisting on a “backstop” clause in any withdrawal treaty to avoid erecting border posts between the British province of Northern Ireland and EU member Ireland if London and Brussels cannot agree a trade pact for the future.

A seamless border is part of the settlement which largely ended decades of violence in the province.

Signals that the EU was willing to engage with the new plan taking shape in London sent the pound rising against the dollar.

Tusk urged May to put a round of angry rhetoric behind and get down to sealing an agreement that would preserve peace in Ireland and open the way to a post-Brexit relationship he called “Canada plus plus plus” — combining free trade deal like the one agreed with Canada with close security, global affairs, research and other cooperation.

Another senior EU diplomat said the bloc’s offer was to have “zero tariffs and zero quotas” in UK trade after Brexit.

EU diplomats and officials described an emerging new proposal under which Britain would agree to an indefinite border backstop solution, a commitment missing in London’s previous proposal rejected by the remaining 27 EU states last June.

But Britain would stick to its line that, if the backstop was triggered, the whole of the United Kingdom would stay in a customs union with the EU. That would mean having the same external tariff on some goods, as the EU currently has with Turkey, and curb Britain’s ability to strike trade deals with other countries.

Under the British proposal described by EU sources, that would remove the need for customs checks on goods and agriculture on the island of Ireland.

While Varadkar has not ruled that out point-blank, he told a Brussels news conference: “There would be constraints. A lot of countries would take the view that any UK-wide arrangement is really a matter for future relations rather than a backstop which is about Ireland and Northern Ireland,” he said.

The EU has feared such an arrangement could allow Britain to use Northern Ireland’s special access to the bloc’s single market to push goods that did not conform to high EU norms, and hence be sold cheaper.

For separate regulatory checks, Britain would agree to simplified, light controls on goods going from the British mainland to Northern Ireland that would be carried out away from the actual border as much as possible, according to EU sources describing the emerging proposal.

That is difficult for May, whose government relies on the support of the Northern Irish Democratic Unionist Party which vehemently opposes differing rules on its soil from the rest of the United Kingdom. Barnier is due to meet the DUP head Arlene Foster next week.

EU and Britain are seeking “decisive progress” on the Irish issue in time for a leaders summit due Oct.17-18 and then a final deal, including a blueprint of future relations, at another one in mid-November.

Should they succeed, Britain would get a status-quo transition period after Brexit until the end of 2020. Should they fail, London faces crashing out of the bloc next March with little to replace four decades of closest cooperation from trade to security to air traffic.