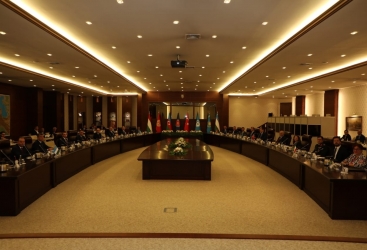 The first meeting of the secretaries of the security councils of the member and observer states of the Organization of Turkic States has been held in Ankara and Istanbul, Turkey.

Azerbaijan was represented by a delegation led by Secretary of the Security Council of Azerbaijan Ramil Usubov.

During the meeting, the heads of the delegations discussed cooperation in military, economic, energy, transport sectors, in the field of food safety, information security, the fight against terrorism and transnational organized crime, and exchanged views on overcoming modern challenges and threats in this direction.

The delegations also visited the Turkish Aerospace Industry (TÜSAŞ) and got acquainted with Turkiye’s achievements in the field of defense industry.