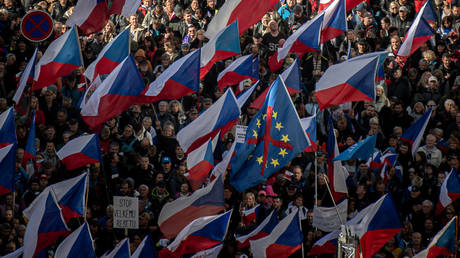 Tens of thousands accused Prague of serving Brussels and Washington instead of Czechia Protest against the Czech government at Wenceslas Square in Prague, Czechia, September 28, 2022. © Lukas Kabon / Anadolu Agency via Getty Images

A crowd numbered in the tens of thousands gathered in Prague on Wednesday to protest against the Czech government, NATO, and the European Union. Demonstrators called for Czechia’s neutrality and protested Prime Minister Petr Fiala’s policy of sanctioning Russia, which has driven up energy prices.

Meeting on St. Wenceslas’ Day – a public holiday celebrating Czech statehood – the crowd took to Prague’s main square, named after the medieval saint, and chanted slogans against the EU, NATO and Fiala’s cabinet. Prague police would not give a specific figure of the estimated crowd size, calling it only “tens of thousands.”

Read more:   Beijing calls on Washington to drop 'cold war mentality' and 'cooperate' with China ahead of high-level meeting next week

The protest was organized by a group called ‘Czech Republic First,’ which Reuters described as a coalition of “far-right and fringe groups and parties including the Communists.” CRF opposes the EU and NATO and has called for Czechia’s military neutrality.

“A government has two duties: to ensure our security and economic prosperity. This government does not fulfill either of these duties,” said one unidentified speaker at the rally, according to Reuters.

The anti-sanctions protest movement in the Czech Republic have started.The organisation behind the protest calls for the exit of the Czech Republic from the EU and NATO, and an end to hostility towards Russia.#CzechRepublic#Praguepic.twitter.com/LqdOp9GtE7

A demonstrator named Pavel Nebel accused the government of being “absolutely anti-Czech” and serving only the EU, NATO, and “American power” at the expense of Czech interests.

The organizers called for another protest on October 28 and said they intend to ask President Milos Zeman to disband the government and call for early elections, according to Lidove Noviny. It was the second such rally this month, after some 70,000 people took part in the September 3 protest, according to police. Similar rallies in other Czech cities drew hundreds of participants. 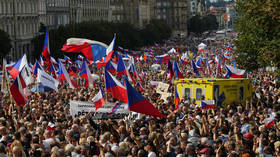 “People should not be taken advantage of by manipulators who offer simple but unrealistic solutions in the squares,” Interior Minister Vit Rakusan told Lidove in response to the protest.

Fiala had dismissed the September 3 demonstrations as “pro-Russian,” accusing their organizers of listening to “Russian propaganda and disinformation campaigns.” His government has diligently followed the lead of Brussels in imposing trade embargoes against Moscow over the conflict in Ukraine, which has translated into skyrocketing prices of energy normally imported from Russia.

Czechia had joined NATO in March 1999, just days before the US-led bloc attacked Yugoslavia. It became a member of the EU in May 2004. (RT)