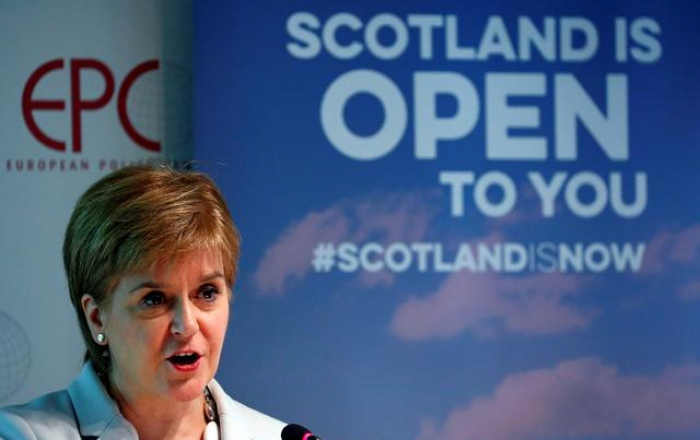 Scottish First Minister Nicola Sturgeon accused the British government of lacking “maturity” by withholding diplomatic support for her trip to visit EU officials in Brussels, and suggested it was part of Foreign Secretary Jeremy Hunt’s campaign to lead the Conservative Party, Reuters report.

Asked about the denial of logistical help, Sturgeon told an audience at Brussels’ European Policy Centre on Tuesday that it was among “issues that tell you everything you need to know about the current maturity of governance in the UK”.

Hunt asked Scotland’s devolved executive to run the visit itself because UK diplomats could not support “activities intended to campaign for policies contrary to (the British government’s) position”, a British government spokesman said.

Sturgeon was meeting EU Brexit negotiator Michel Barnier and European Commission President Jean-Claude Juncker on Tuesday to explain her nationalist government’s efforts to have Britain remain in the European Union or at least in its economic area – both in opposition to current British government policy.

She was also outlining her plans to hold a new referendum on Scottish independence – again in defiance of London’s position.

Sturgeon said denying support was “absurd” and showed London was “trying to undermine a devolved government’s efforts to protect the interests of our country”. She added: “There’s probably more about the foreign secretary playing to the audience of Tory party members in the leadership election.”

Hunt is among contenders to succeed Prime Minister Theresa May. May, who will hand off the premiership next month once her successor is chosen, resigned the leadership after failing to get parliamentary support for her withdrawal deal from the European Union.

If Brexit happens, Sturgeon said, Scots, who voted heavily against it, should be given a new say on breaking from England and joining the EU as an independent country. Scots rejected independence by a 55%-45% majority in a 2014 referendum.

Sturgeon’s government is preparing legislation for another vote, which she suggested might be held later next year. She dismissed objections from London as unsustainable, although polls show about half of Scots also oppose a referendum in the near future.

Scotland’s contrasting commitment to the European Union had, she said, earned it support in Brussels and other EU capitals, which had been cool in 2014 to Scotland’s push for independence – a factor exploited during the campaign by unionist parties.

Sturgeon suggested there had been a “paradigm shift” in EU attitudes, adding, “Many people … since the Brexit vote have a deepened understanding both of why Scotland might want to be independent and what the benefits of that would be … From 2014 to now, the vibes … I get from people in Brussels and across the European Union are markedly different.”