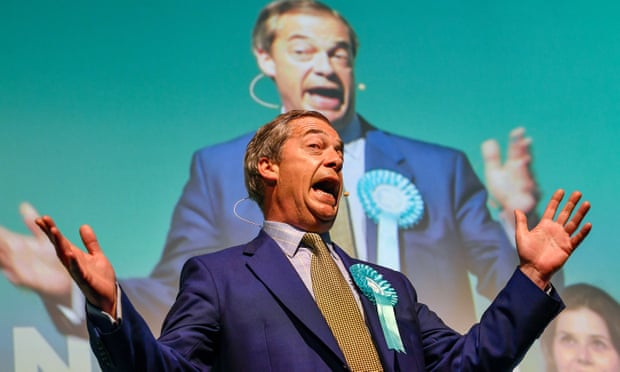 Nigel Farage has called on “genuine Scottish nationalists” to vote for his Brexit party in next week’s EU elections, as he described Nicola Sturgeon’s campaign for an independent Scotland within Europe as “the most dishonest political discourse anywhere in the world”.

As anti-racist protesters chanted outside the venue, Farage told cheering supporters at a rally in Edinburgh: “If you’re genuinely a nationalist lend your vote to the Brexit party, let’s get out of the EU and then have an honest debate about independence.”

Speaking to the media before going onstage at the Edinburgh Corn Exchange with the Brexit party’s EU election candidates for Scotland, Farage said: “The impression that’s often given by Nicola Sturgeon is that almost everybody in Scotland thinks the European Union is a fantastic idea, when the reality is that 30% of her own voters, because they are actually genuinely nationalists, voted to leave the EU.”

Despite his leading Scottish candidate, Louis Stedman-Bryce, stating in an interview this week that the party would not oppose a second Scottish independence referendum, Farage insisted that both independence and EU votes were once-in-a-generation decisions.

A buoyant Farage, perhaps relieved that he was not facing the level of public anger that led to him being hounded out of central Edinburgh in 2013, insisted that Scotland was more receptive to his message than it had been in previous years.

“I do think there’s not been a proper debate on the EU in Scotland because there’s not been a genuine opposing voice here making the Eurosceptic argument, and what I’m hoping is that if we can make a significant breakthrough in these elections we can start to do that.”

A crowd of around 400 people whooped as Farage told them that the political establishment in Scotland was treating leave voters “with utter contempt” and was “terrified” by the latest polling that predicted his Brexit party could win two of the country’s six MEPs. The audience booed mentions of Barnier, Juncker and Tusk, along with references to the mainstream media, the BBC, Andrew Marr and Sturgeon – although they did not boo the mention of independence.

Read more:   Google and Facebook in spat over cyber attack

One of those in the crowd, Catherine Barnsley described Farage’s presentation as “absolutely fantastic”. She said: “[Leavers] have no party in Scotland that has stuck up for us. [Scottish Tory leader] Ruth Davidson is a remainer, so is [Scottish Labour leader] Richard Leonard. Nigel’s come along and given us a voice and we will be heard. He’s incredible and he’s got a lot of support.”

Farage pledged that he would prepare candidates for the upcoming Holyrood elections in 2021 and dismissed the “howling mob outside” as “considerably smaller than it was a few years ago”. In 2013, he was finally whisked away in a police riot van under a tirade of abuse from a crowd of about 50 young demonstrators. On Friday night, police estimated that around 200 demonstrators had gathered outside the Corn Exchange.

One of them, Beth Cameron, insisted that there was “no appetite” for Farage’s politics in Scotland. The marketing executive said: “He is deliberately provocative and divisive, and I think by and large people are disgusted by his politics, especially the xenophobia. Scotland is such a welcoming country and that’s completely at odds. I’m very surprised that he decided to come here, particularly after what happened last time.”

Isla MacLean, a staff nurse, insisted that she was not trying to tell people who to vote for. “I’m originally from Aberdeenshire and I know that a lot of people there who voted to leave because of fishing, but now think that this is not what they voted for. I do think the EU elections are going to be a really important chance for those people to say ‘this is not what we wanted’.”