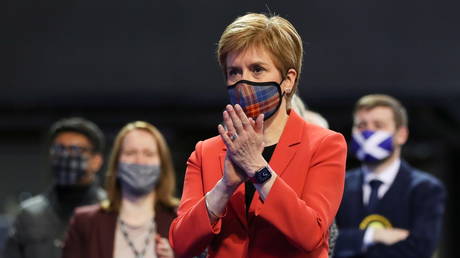 Nicola Sturgeon reacts as votes are counted for the Scottish Parliamentary election, in Glasgow, Scotland, May 7, 2021 © Reuters / Russell Cheyne

Scottish First Minister Nicola Sturgeon has warned Prime Minister Boris Johnson not to block another independence referendum. However, Sturgeon may not be in a position to demand such a vote.

With counting still underway in Scotland’s parliamentary election, Sturgeon’s is on track for a fourth term as first minister, winning 62 out of 86 seats declared thus far. However, 129 seats are up for grabs, and owing to Scotland’s convoluted voting system, Sturgeon’s Scottish National Party is likely to fall short of an outright majority.

Also on rt.com Bogus story of Iranian interference in Scottish politics shows Western media to be the true election meddler

Still, with her party set to remain the largest in Holyrood, Sturgeon already has her eyes on another independence referendum. She warned Prime Minister Boris Johnson on Saturday that should “any Westminster politician” try to block such a vote, they would be “picking a fight with the democratic wishes of the Scottish people.”

“You will not succeed, the only people who can decide the future of Scotland are the Scottish people,” she told reporters.

Even if Sturgeon is left without an overall majority, she could easily recruit the Scottish Greens to back an independence referendum. As of Saturday afternoon, the pro-independence Greens had picked up enough seats to give Sturgeon majority support for an independence vote. (RT)

Some 322 people received their anti-coronavirus shots in Azerbaijan today, the Task Force under the…