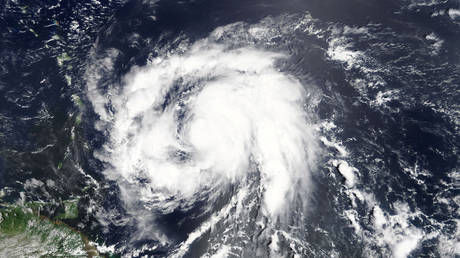 File photo: Hurricane Maria is shown in the Atlantic Ocean about 85 miles east of Martinique in this September 17, 2017. © NASA/Handout via REUTERS

By studying the coral reefs offshore of Puerto Rico during Hurricane Maria in 2017, researchers have discovered previously hidden forces which dramatically increase the strength of hurricanes.

While parsing through the high-resolution data from subsurface oceanographic instruments positioned along coral reefs in southwest Puerto Rico, researchers from the US Geological Survey (USGS) may have inadvertently stumbled upon a new method which could improve forecasts ahead of the Earth’s most devastating storms.

For context, Hurricane Maria killed over 3,000 people and inflicted some $90 billion of damage while causing the longest blackout in US history, so this type of insight is essential to saving lives and entire communities.

Led by USGS oceanographer Olivia Cheriton, the researchers uncovered how previously undiscovered underwater currents interact with the coral reef geometry to effectively supercharge storm systems like the one responsible for the category five Hurricane Maria.

Also on rt.com At least 11 killed and 100+ injured by violent hurricane winds in China (VIDEOS)

Hurricane Maria gained up to 65% more power as a result of these interactions between the hidden underwater currents and islands’ shorelines, which both strengthened and stabilized the storm.

“We were surprised to find that the direction of the approaching hurricane winds relative to the coastline kept the ocean surface layer distinctly warmer compared to the colder waters below,” said Cheriton.

“This is important because warmer sea surface temperatures provided more energy for the storm.”

Sea-surface temperatures (SSTs) are one of the main factors which determine the ultimate strength of a hurricane, but they are poorly understood. Based on the data produced by their network of subsea instruments, the USGS researchers found that it took over 11 hours for the coastal waters around Puerto Rico to cool after Maria had passed over. (RT)

The Kremlin is closely monitoring the situation with the parliamentary elections in Armenia, said Russian President’s Spokesperson…