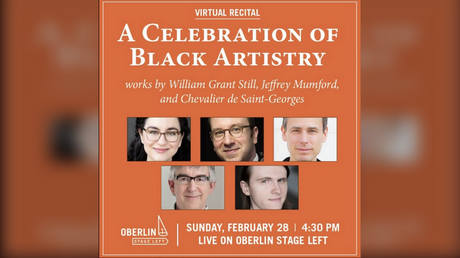 The flier advertised the virtual event as a “Celebration of Black Artistry,” but the images on it of those performing showed they were five white musicians: cellist Darrett Adkins, violinists Francesca DePasquale and David Bowlin, pianist James Howsmon, and harpsichordist Mark Edwards.

Oberlin has just made a really massive and public misstep. pic.twitter.com/mAH38uUrbi

The Sunday afternoon recital was intended to be a celebration of music created by people of color and featured the works of notable black composers William Grant Still, Jeffrey Mumford and Joseph Bologne.

After numerous critics took issue with the billing, the Oberlin Conservatory, which is housed within Oberlin College, claimed the promotion had been taken “out of context.”

“We acknowledge that it was a mistake to post this event out of context, and without pictures of the composers themselves, and we are deeply sorry,” read the apology. “We will continue to be reflective and consider our policies moving forward in order to prevent a post of this nature from happening in the future.”

Numerous former students of the college took to social media to express their dissatisfaction, and many of the comments were subsequently deleted by the college, along with the flier. (RT)

The New Azerbaijan Party (NAP), which has a majority in the Milli Majlis, has submitted…

Next group of journalists to be vaccinated

21:26 Coronavirus: Japan declares virus emergency in Tokyo as Olympics near