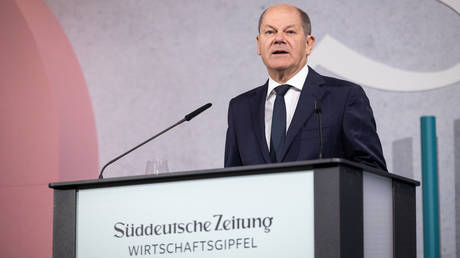 Olaf Scholz, Chancellor of the Federal Republic talks during the Sueddeutsche Zeitung Wirtschaftsgipfel of Germany on November 22, 2022 in Berlin, Germany. ©  Mathis Wienand/Getty Images

The German chancellor says the continent’s current economic woes are down to growth in Asia, rather than to the Ukraine conflict Olaf Scholz, Chancellor of the Federal Republic talks during the Sueddeutsche Zeitung Wirtschaftsgipfel of Germany on November 22, 2022 in Berlin, Germany. © Mathis Wienand/Getty Images

Neither the Covid-19 pandemic nor Russia’s offensive against Ukraine has played a pivotal role in bringing about the current economic downturn in Europe, German Chancellor Olaf Scholz has argued. He attributed it to growth in Asia instead, warning that there likely will not be a return to the good old days in the foreseeable future.

Speaking on Tuesday at an economic summit in Berlin organized by Suddeutsche Zeitung, Scholz said that, for years, countries in North America and Europe had enjoyed a combination of stable growth, low inflation and high employment rates. This, however, according to the chancellor, was an “economic exception” that cannot be expected to last any longer.

“Russia’s war [against Ukraine] and the economic consequences of the [Covid-19] pandemic may have expedited” the end of this era, the politician opined. He hastened to add, however, that “they were not the trigger for it.”

Scholz went on to explain that, for decades, countries such as Vietnam and Indonesia have mainly been viewed as a source of cheap goods for the European, American and, increasingly, the Chinese markets. But in the meantime the same Asian nations experienced an explosive increase in the number of people belonging to the middle class. Those individuals’ purchasing power rose accordingly. This, the German chancellor postulated, is what has led to growing inflation elsewhere. 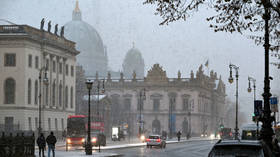 He noted that, at the same time, this is a major story of success enabled by globalization. He also warned against deglobalization, calling on Germany and other European nations to embrace more trade with emerging economies, “of course, [trade] by fair rules.”

“An increasingly multipolar word is arranging itself right now, fundamentally anew,” a development which is best seen in South-East Asia, Scholz argued.

He hastened to reassure German businesses that they have nothing to fear, as their goods will remain in high demand in this new world and they only stand to gain more.

Speaking of the current energy crisis in his country, Scholz accused Russia of weaponizing gas exports, adding that Germany had made a mistake in relying too much on one supplier. He vowed that Berlin will never repeat this, going forward, meaning that dependence on China will have to be reduced as well. Germany, he said, needs to look for new suppliers and markets for its goods.

The chancellor promised to make sure Europe’s economic powerhouse sees itself through the coming winter. (RT)