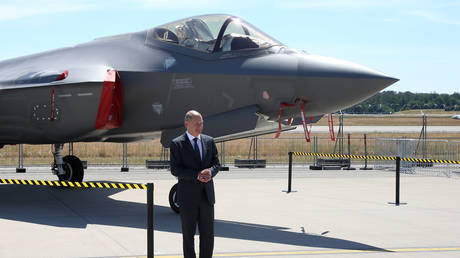 Germany will speed up the procurement of US-made F-35 fighter jets to maintain its capability to deploy nuclear weapons as part of NATO’s shared deterrence, German Chancellor Olaf Scholz has said. Russia perceives the global expansion of the US-led military bloc’s reach as a major threat.

Berlin needs to be able to deploy nuclear weapons as long as Russia has a nuclear arsenal, the German leader said on Wednesday at a Security Conference in Berlin. Anything short of that “would mean making us vulnerable to blackmail”, he added.

Scholz was referring to Western claims that Moscow was threatening to use nuclear weapons to gain the upper hand in the Ukraine conflict. Russian officials have rejected that narrative, saying its warnings were simply a reiteration of the country’s nuclear posture.

Russia’s position is that “any military confrontation between nuclear nations, even a conventional one, must be avoided” due to risks of escalation, Russian Foreign Minister Sergey Lavrov said on Wednesday during a strategic security event in Moscow.

“The fact that our Western partners… try to avoid this [approach] speaks volumes,” he added.

The German chancellor said his country would finalize a deal by the end of the year on procuring Lockheed Martin F-35 fighter jets, designed to launch nuclear bombs. 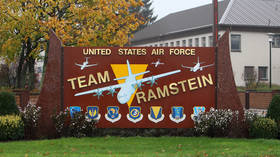 Russian ambassador tells US to bring its nukes home

Read more:   All travel from Europe to US suspended for 30 days

Currently, the only warplanes in the German fleet with that capability are Panavia Tornados, which the military seeks to replace with more modern aircraft. The Luftwaffe has some 90 of the jets, which were introduced in the 1980s and are due to be phased out between 2025 and 2030. Germany is reportedly considering a purchase of up to 35 F-35s under a €100 billion ($104bbn) rearmament program, which Chancellor Scholz announced earlier this year.

The inclusion of the American aircraft on the list of replacement candidates, which the German Defense Ministry reported to parliament in March, reversed a previous decision by the government of Chancellor Angela Merkel, which favored the European Eurofighter Typhoon fighter jets.

Those aircraft, however, are not compatible with US-made B61 nuclear gravity bombs, so a complimentary purchase of Boeing F/A-18E/F Super Hornet was being considered under both the Merkel and the Scholz governments.

Russia has long criticized NATO’s nuclear-sharing scheme as violating the spirit of the Nuclear Nonproliferation Treaty. By training countries such as Poland on how to deploy American nuclear weapons, Washington is destabilizing the balance of power in Europe, Moscow has argued. (RT)