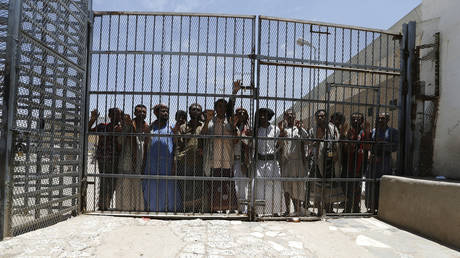 FILE PHOTO: Inmates stand behind the gate at the central prison in Sanaa, Yemen, May 26, 2014 © Reuters / Khaled Abdullah

Yemen’s Saudi-backed government and Iranian-backed Houthi rebels will exchange more than 1,000 prisoners, a landmark swap in a brutal five-year war. UN officials said that the exchange could pave the way for a ceasefire.

The exchange was agreed on Sunday, after ten days of talks in Switzerland. The Houthis will release 400 people, including 15 Saudis, and the Saudi-backed government will free 681 Houthi fighters, Reuters reported.

Yemen’s civil war has been ongoing since 2014, when the Iranian-aligned Houthis ousted Yemen’s government from power. The war intensified in 2015 when Saudi Arabia – backed by Western powers – intervened on behalf of the ousted government. Tens of thousands of people have been killed, and the Saudi blockading of Yemen’s ports triggered what the Norwegian Refugee Council called a “man-made famine of Biblical proportions.” (RT)