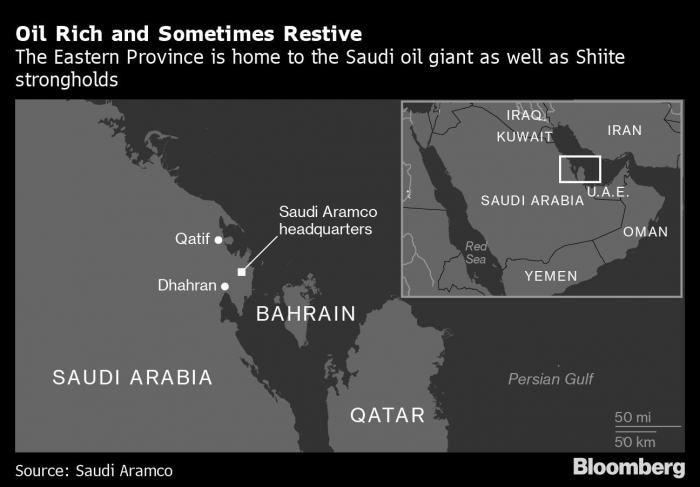 At a cultural gathering in the region of Qatif in Saudi Arabia’s oil-rich east, a poet recited some of his work before taking questions. The audience of 80 or so people was engaged and smiling, while a man quietly served coffee and tea in espresso-sized paper cups.

The scene of relaxed conviviality on a Monday evening in November might have been anywhere, save for the white thobes worn by the men, the women in mainly black abaya cloaks and the smell of cardamom in the coffee. But the event stood out for where and when it was, rather than what it was.

Qatif is an area inhabited mainly by Shiites, who make up roughly 15 percent of the Saudi population and whose branch of Islam is most identified with Iran. The poet was a Sunni, the sect that dominates the kingdom.

The organizers said they had hosted Sunnis before, yet the atmosphere during a tense period for Saudi-Iranian relations showed how much Saudi Arabia has changed over the past three years. Crown Prince Mohammed bin Salman, the leader and heir, is trying to fashion a kingdom underpinned by national identity rather than the traditional Wahhabi religious conservatism that defined society for generations. He has sought to crush any dissent against that new narrative.

As a proxy war rages with Iran, there’s been none of the usual tightening of security around Shiite areas in Eastern Province. Also absent are the verbal attacks by radical Sunni clerics that accompanied previous episodes of tension with Iran.

Saudi Shiites interviewed on two days in Qatif, less than an hour’s drive from oil giant Aramco’s headquarters, said anti-Shiite language in religious classes in their area has been toned down, more effort is being made to include a few Shiites in scholarship and training programs and more jobs are open for them.

A science teacher who now lives in the adjacent city of Al Khobar said Shiites would pay the price every time there was conflict with Iran. One woman said the difference now is they no longer felt like “the scapegoat.”  These people declined to be identified by name, something that’s common among Saudis of all backgrounds when talking about the new era.

There was only one checkpoint outside the city and no sign of security personnel. In the past, there were at least four, manned by the Saudi military, on the way from the city of Dammam to Qatif.

“One of the biggest problems for the Saudis has been that the Iranians have made inroads into the Sunni Arab world, and significant ones,” said Kamran Bukhari, founding director of the Center for Global Policy in Washington. “It’s a strategic move by Mohammed bin Salman to say if we alienate our Shiites, then they will go running into the arms of Iran.”

Saudi Arabia has led an offensive against Yemeni guerrillas that it says are backed by Iran. The two regional rivals funded forces on either side of the Syrian civil war. Riyadh hasn’t extended the usual financial aid to Lebanon because of concern money would flow to the Iranian-backed militants of Hezbollah.

During the 2011 Arab Spring, Saudi security forces were quick to put down an uprising in Shiite-dominated Bahrain in case it spread to Eastern Province. The two territories are connected by bridges and causeways. In the years since then, the Saudi region has been blighted by bouts of unrest, detentions and demonstrations.

The Shiites, whose split with the Sunnis goes back to the period following the Prophet Mohammed’s death, have been marginalized in Saudi Arabia and excluded from top jobs in the government and military. Those interviewed earlier this month said that while they’re happy with the changes, they also worry that progress could be reversed at short notice.

“The problem is, the remote control is not with us,” one Shiite man who ran his own investment company said over a fish lunch in Qatif. “They have turned down the volume, but they still have the remote control. We don’t know when they will use it.”

That sentiment seems prevalent. “Yes, there’s been an improvement, but it will take time to change the mindset of ordinary Saudis who have been bred on hatred of Shiites,” said a Shiite woman.

Saudi Shiites say the atmosphere changed after a three-month campaign in the Shiite-majority town of Awwamiya in Eastern Province in 2017 that leveled dozens of homes and sent thousands fleeing. A year later, the government announced plans for a new downtown area with a cultural center and a gallery in what Saudi-owned Al Arabiya TV said was deploying development to fight terrorism.

The government, meanwhile, clipped the wings of the radical Sunni clerics who held sway over religious, social and legal policies and used the most derogatory language to describe Shiites, Jews and Christians. It also introduced a law against hate speech in August 2017 that gave the Department of Public Prosecution the power to charge offenders with spreading hate speech and threatening peace and security.

The Wahhabi version of Sunni Islam considers Shiites heretics. Saudi Shiites frequently had to defend themselves against claims they might be a potential fifth column for Iran.

Read more:   US comments on recent escalation along Armenia-Azerbaijan border

“Their enmity to Islam and Muslims has long been known,” Sheikh Saleh al-Fowzan, a member of the Council of Senior Scholars, the kingdom’s highest religious authority, was quoted by Al-Madina newspaper as saying in June 2013. The remark came after Hezbollah said it had joined the fight alongside the Syrian regime against mostly Sunni rebels.

In early 2016, a prominent Shiite cleric was beheaded along with dozens of others charged with terrorism offences. He was blamed for inciting unrest in Eastern Province five years earlier. His execution prompted protests in Tehran against the Saudi embassy, which has remained shut since then because diplomatic ties were severed.

There are more recent cases. Human Rights Watch said a mass execution in April included 33 Saudi Shiite men, and that maltreatment under Prince Mohammed has continued.

The relative peace now could be an unintended consequence of “Vision 2030,” the crown prince’s blueprint for his transformation of the kingdom, according to another Shiite businessman.

The situation is “much better and the atmosphere is more relaxed, but that’s also because Prince Mohammed crushed the dissent and jailed many of the agitators,” Sunnis and Shiites alike, he said. “The religious establishment was one of the main tools against us. We definitely don’t feel under attack anymore.”

Indeed, many Shiites in Qatif have bought into the prince’s focus on Saudi identity and the new social freedoms, such as allowing men and women to interact with fewer restrictions, the businessman said.

“Our families and most Shiites here feel a religious connection to Iran,” said a Shiite woman. “But whenever there’s trouble, they know it’s only Saudi Arabia that can help us.”