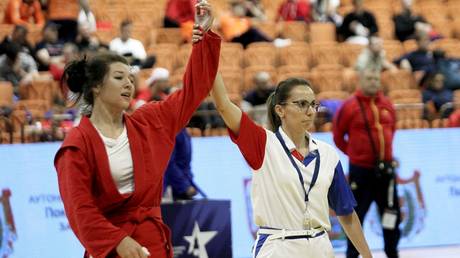 Russia’s Tamara Lishchenko was among those to compete in Serbia. ©  RIA Novosti / Aleksandar Djorovic

The Russian Sambo team finished in first place at the European Championships Russia’s Tamara Lishchenko was among those to compete in Serbia. © RIA Novosti / Aleksandar Djorovic

Russian Sports Minister Oleg Matytsin says that the country’s performances at the recent European Sambo Championships in Serbia demonstrates how integral Russia is to the landscape of global sport.

Sambo is a combat sport which has its roots in the Soviet Union and takes in various different striking and grappling elements. It is traditionally popular in Russia and the surrounding territories.

Prominent mixed martial arts fighters such as Khabib Nurmagomedov and Fedor Emelianenko can trace much of their success in the cage down to their education in the martial art.

The Russian team, who were competing under a neutral flag at the European Championships which ran between September 15 and 18, finished in first position in the overall medals haul at the event in the Serbian city of Novi Sad, although this came amid the backdrop of a Ukrainian boycott in protest at the inclusion of both the Russian and Belarusian squads. 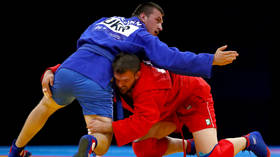 The International Sambo Federation gave its blessing to martial artists from both Russia and Belarus to compete in spite of a recommendation to the contrary from the International Olympic Committee (IOC), with the two countries suspended from a host of other sports following the onset of the military campaign in Ukraine earlier this year.

Read more:   Turkish columnist: Pashinyan made fool of himself in debate with Aliyev

“I am glad to congratulate our Sambo team on a brilliant result at the European Championships,” Russian Sports Minister Matytsin said on Monday as he reacted to the success.

“Russians won 51 medals, 40 of which were gold, and rightfully led the team competition.

“The decision of the International Sambo Federation to allow the teams of Russia and Belarus under a neutral flag at the European Championships is an important an opportunity for athletes to appear in a competitive environment, to perform at a tournament for which they have been preparing throughout the season.

“And with their result, they have confirmed that Russian sports are an integral part of the European and world sports community,” added Matytsin.

The minister also called upon the victorious Russian team to continue their success at the World Championships to be held in Kyrgyzstan in November.

Meanwhile, the Ukrainian boycott which affected this year’s European Championships had previously been criticized by head of the European Sambo Federation, Sergey Eliseev.

“It is very important for us that all athletes can compete regardless of political situations. And we consider it wrong to mix sports with politics,” he said. (RT)