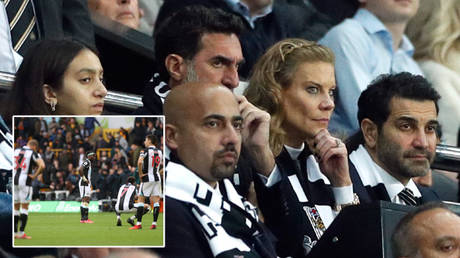 The wealth Newcastle now have courtesy of Saudi Arabia’s Public Investment Fund has the potential to bring about a Premier League power shift. Putting that into practice, as the new owners are about to discover, will not be easy.

Newcastle’s statement on Steve Bruce in the immediate aftermath of the confirmation of their Saudi-led takeover was an entertaining exercise in pantomime. An unpopular manager among his own fans even without the added pressure of expectant owners with outlandish wealth, Bruce was publicly informed that he would be told first when he was sacked. A game later, he was ousted with the ceremony of a stray cat being shooed from a side gate.

It was a far easier decision than Chelsea or Manchester City needed to make after their transformative takeovers. Claudio Ranieri did not deliver the glory implicitly required after Roman Abramovich’s takeover of his club, but he had left them second only behind Arsenal’s famous ‘Invincibles’, a side who achieved the phenomenal feat of going an entire Premier League season unbeaten.

At City, Mark Hughes had guided his team to sixth in the table in the 2008/09 season with one of the strongest home records in the country, and had been entrusted with spending plenty of the Abu Dhabi investment group’s fortune ahead of a promising start to the following campaign, albeit one that justified his departure with a dire subsequent run of form.

Bruce, by pronounced contrast, had a dismal time at Newcastle. For the uninitiated, the former Manchester United defender has a respectable record in the divisions below the top flight in England, including a number of promotions. He is also perceived as the purveyor of a particular brand of cautionary tactics that could be charitably deemed pragmatic and less generously considered completely at odds with the thrill-a-minute delusion the Premier League often seems to market itself upon.

His dismissal, then, gave owners mired in talk of morality an easy burst of popularity. It was as inevitable as co-owner Amanda Staveley seemed to hint Newcastle’s eventual Premier League title, however long it may take to materialize via what is likely to be prolonged periods of lavish spending, will be. Unfortunately for the consortium, that prospect seems far less certain than Chelsea’s crushing success did after the Abramovich era began.

Also on rt.com Don’t expect Newcastle fans to rebel against the Saudis – ousting the old regime was more important for them than sportswashing

Abramovich’s path has not always been a linear one, gradually shifting from little-known owner under initial suspicion towards adulation and – more valuably – ingrained respect from Chelsea fans. Jose Mourinho was a gift: an upstart with a bravado and understanding of psychology that was ahead of its time before it was left long behind in the years that followed, as well as a Champions League title.

Roberto Mancini, a stubborn, donnishly self-assured character, was also an easy choice for City. Mourinho and Mancini joined clubs who were already contenders in the wings. Newcastle have a great deal more ground to make up, having been in the second tier only four years ago.

Also on rt.com Talk of the Toon: Ecstatic Newcastle fans take to the streets in celebration after Saudi takeover confirmed (VIDEO)

Chelsea had Arsenal to overhaul for Abramovich’s first title – an outstanding side at the time, but with an air to that near-perfect season that it would never be repeated, and a manager in Arsene Wenger seemingly unwilling to blow anybody out of the water with rampant spending.

City went neck-and-neck with Manchester United for a while, perennial giants whose resources and stature should always make them challengers, their exact status in the shake-up variable according to who is using the budget and wandering the technical area. The Manchester clubs, along with Chelsea and Liverpool sides who are formidable proposition under Thomas Tuchel and Jurgen Klopp, look enshrined in future title races for years to come, making the challenge more complicated than it was when Chelsea and City changed the course of English football so dramatically and swiftly.

Also on rt.com ‘Another club owned by a country’: Klopp questions Saudi takeover at ‘new superpower’ Newcastle & what it means for football

There is unlikely to be one man who can suddenly guide Newcastle from rebirth to revolution. There are arguably no outstanding candidates anyway. Paulo Fonseca, who has held more than one round of talks with the club, is a fine manager but unproven, lest anyone should think that winning the Ukrainian Premier League title three times is a guarantee he will be ready to spend hundreds of millions of dollars in the Premier League.

Almost none of the other candidates mentioned, from Lucien Favre and Steven Gerrard to Eddie Howe and Roberto Martinez, have even spent any time operating at the sharp end of the league, let alone succeeded there. Some players and agents will be hovering in wait around the club, ready to capitalize on what they will suspect – with some justification – is a hierarchy naive in this kind of notoriously ruthless environment.

Whoever comes in will have to wait until the January transfer window – a thorny time to be striking deals – to be able to rely upon the kind of comfort spending that Abramovich facilitated at Chelsea. By then, Newcastle could be in the middle of what is looking decidedly like a relegation battle at the moment, with no wins in their first eight matches constituting cause for alarm rather than evidence of the blips that Chelsea and City could have been construed as experiencing when their ownerships changed.

With no immediate room for maneuver, things could get worse before they are ever to get better. This is looking like being an experiment in how much money needs to be thrown at a team to prevent, at first, a downward spiral becoming terminal. Newcastle’s predecessors in sudden endowment faced a luxurious predicament by comparison: a plateauing of success, inertia at the top end of the table.

Abramovich could tell Newcastle’s owners that luck is an essential element. The reappointment of Mourinho at Stamford Bridge, producing a title followed by a plummet towards the bottom of the table, encapsulated that, as did the astonishingly successful appointment of Tuchel, who was hardly red-hot property after his spell at Paris Saint-Germain. The trouble for Newcastle is that the stakes for failure are that much higher, and establishing themselves among the giants requires bridging a gap wider than the teams who have done it before were faced with. On the path towards their sky-high ambitions, their first managerial change could end up resembling a quaintly straightforward, relatively drama-free episode.

Topics to be discussed by Biden and Putin revealed

US President Joe Biden, during his upcoming conversation with Russian President Vladimir Putin, intends to…