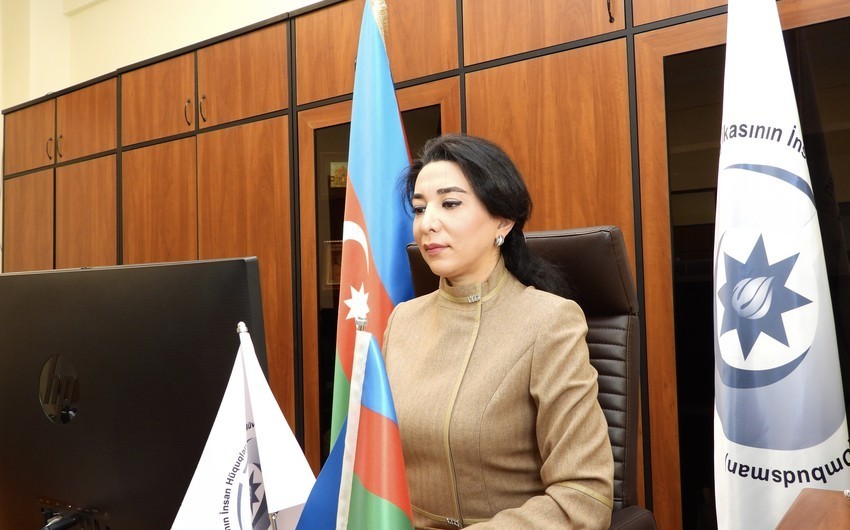 She said Armenian Ombudsman’s allegations regarding the torture of Armenian prisoners in Azerbaijan are Armenia’s next step in hiding the truth and misleading the world community with false information related to the country’s traditional policy:

“In this regard, we inform you that Ombudsman Sabina Aliyeva and the representatives of the Office, guided by the requirements of international conventions, have visited Armenian PoWs and members of military units who were detained in our liberated territories and handed over for investigation several times. Their rights were explained to them in their languages during those visits. Those Armenian citizens did not complain about the conditions of detention and treatment. Moreover, it was determined that medical care was organized for them at the level of international standards, and conditions were created to maintain telephone contact with their family members. Reports were also submitted to international organizations regarding these visits of the Ombudsman.

“The members of the Ombudsman’s National Preventive Group visited the Armenian military personnel captured after the latest large-scale provocations launched by Armenia on September 12 of this year, and their rights were explained to them. Those persons who were received individually did not complain about the conditions of detention and treatment.

Read more:   Azerbaijani FM: Armenia should think about what heroization of terrorists leads to

“Based on the results of the visits carried out by the Ombudsman, it was established that a humane approach in accordance with the requirements of international humanitarian law was demonstrated in relation to the Armenian prisoners of war in Azerbaijan.

“We consider the circulation of false allegations such as their torture in Azerbaijan, as well as the killing of some persons as prisoners and hostages, after the captives were returned to Armenia, as an attempt to divert the attention of the world community from the crimes committed by Armenia.

“Nevertheless, immediately after the return of our military servicemen who were captured by Armenia and Azerbaijani civilians Shahbaz Guliyev and Dilgam Asgarov, who were taken hostage by Armenia since 2014, the Ombudsman of Azerbaijan held a meeting with them and during individual conversations, they said that they were subjected to a number of torture, cruel and inhumane treatment. They also said in their statements that they were not provided with the necessary medical care during their captivity, and that they were subjected to inhumane treatment by the medical staff. These facts were documented and prepared by the Ombudsman in the form of a report and sent to international organizations. In addition, expert opinion and photos reflecting the reality of Hasan Hasanov, who was taken hostage in occupied Kalbajar along with the mentioned two Azerbaijani civilians and was severely tortured and killed by Armenians, were also attached to that report.

“At the same time, we have repeatedly brought to your attention the materials based on other evidences published in the mass media and social networks regarding cases of torture of Azerbaijani prisoners of war, abuse, burning, and insulting of corpses. Information about this was regularly published on the Ombudsman’s official website, social network accounts and in the press, prepared reports were submitted to relevant international organizations.

“We would also like to remind you that the Armenian side refused to provide information about the nearly four thousand Azerbaijanis who were captured, missing and taken hostage in the First Karabakh War. There is evidence that those persons succumbed to the tortures they suffered, were killed, and were buried en masse. Discovery of mass graves in those areas after the liberation of our lands from occupation, and the facts confirming that the civilians and soldiers buried there were tortured, are a clear indication of this.

“From this point of view, the attempt of the Armenian side, which has committed numerous criminal acts and continues to do so, to present Azerbaijan’s humane treatment of the Armenian captives otherwise is once again an attempt by Armenia to mislead the world community and conceal the crimes by distorting the facts.