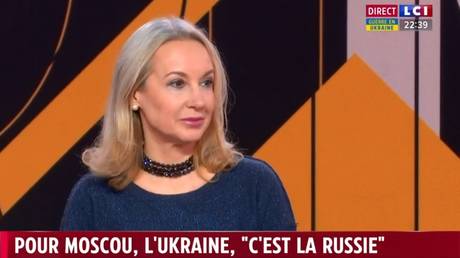 Alla Poedie has also called for the Russian Cultural Center in Paris to be dismantled Ukrainian-born Alla Poedie on French TV. © LCI

During an appearance on French television, Ukrainian-born analyst Alla Poedie compared Russian citizens to pests and urged France to crack down on them and their culture.

Poedie, who describes herself as an expert on the former Soviet Union countries, made the controversial claims on the LCI news channel on Tuesday during a talk show dedicated to the conflict between Russia and Ukraine.

“It’s necessary to make sure that Russia is held responsible [for its military operation in Ukraine] with all its citizens around the globe, who sometimes cause a lot of harm,” she said.

The expert insisted that it was “shameful” that the Russian Orthodox Spiritual and Cultural Center remained open in the center of Paris. The complex, which also includes the Holy Trinity Cathedral, was “packed with [Russian] spies,” she said, without providing any proof for her claim.

“And we accept them. We don’t kick them out. Why? This complex must be closed and completely destroyed. It has no right to exist,” Poedie said. 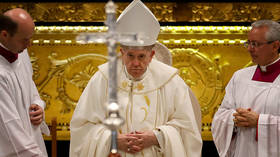 She added that an investigation into how the Russian cultural center was even permitted to be built in the French capital is necessary.The complex was opened in 2016 under then-French President Francois Hollande, with Paris’ mayor and Russia’s culture minister both attending the ceremony.

The show host also asked the expert whether she thought that those Russian men who’d fled the country during the partial mobilization between September and November of this year, should also be prosecuted and put behind bars.

“Those are cockroaches. That’s it. They run away from the country like cockroaches because they don’t want to fight from the inside and depose the current regime,” Poedie replied.

Read more:   Canada, France to co-op with their int'l partners to work toward sustainable post-COVID recovery

Judging by the footage, some of the guests in the studio felt really uncomfortable to hear such statements.

According to the Russian media, Poedie was born in Kiev but immigrated to France after marrying a Frenchman. She’s been making frequent appearances on French TV during the conflict in Ukraine, taking a harsh anti-Russia stance. She used to be head of the French-Ukrainian business club and now reportedly makes money by receiving and accompanying VIP tourists in France.

In July, Russia’s Foreign Ministry spokeswoman Maria Zakharov said that Moscow has intensified its activities aimed at supporting Russian citizens abroad due to what she described as “an unprecedented barbaric surge of xenophobia, including in the form of Russophobia.” Russians in Europe and elsewhere were faced with “aggressive attacks and threats, discrimination… based on nationality, language, citizenship and stance,” she said. (RT)