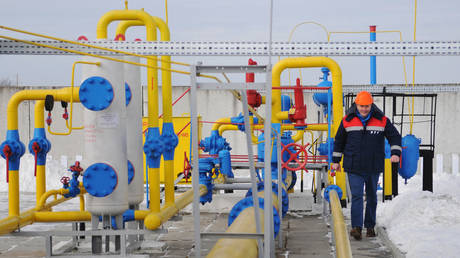 Russian-state owned energy firm Gazprom has reportedly decided not to purchase the rights to move additional gas supplies through Ukraine, on top of its normal exports, for August as a debate rages over Kiev’s transit revenues.

Hungarian trade platform RBP reported on Tuesday that the company had not begun the process of buying extra capacity for next month, planning to move only 63.7 million cubic meters per day. For July, Gazprom had paid for an additional 15 million cubic meters in order to boost its outflows to Western Europe.

At the end of 2019, the energy conglomerate signed a deal with Kiev that will see it pay for a minimum of 40 billion cubic liters to move through Ukraine each year for the following five years. The country made an estimated $7 billion from the agreement for allowing Russian gas to transit through the Soviet-built network of overground pipes.

However, a number of Ukrainian politicians have claimed that the new Nord Stream 2 pipeline poses a threat to the future of that arrangement, with President Volodymyr Zelensky warning that Moscow could shut off the flow and use the nearly completed Baltic Sea link instead to deliver gas directly to Germany. “Nord Stream 2 will disconnect Ukraine from gas supplies, which means ‘disconnecting’ us from at least $3 billion a year,” he said. Zelensky has claimed this will profoundly impact Kiev’s budget, and the country “will have nothing to pay for the Ukrainian Army.” (RT)