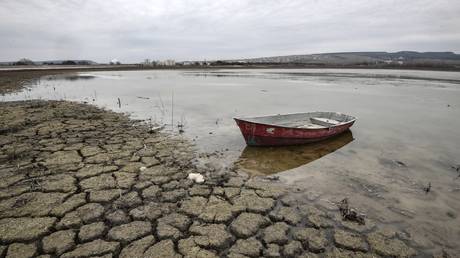 The Bakhchisarai reservoir in the Crimea. Ukraine provided up to 85% of the Crimea's fresh water needs through the North Crimean Canal running from the Dnieper. © Sputnik / Konstantin Mikhalchevsky

Ukraine’s policy to deprive the residents of Crimea of water is an attempt at genocide, according to Russia’s permanent representative to the OSCE, who blasted Kiev’s long-term blockade of a vital canal to the peninsula.

In 2014, the Ukrainian government constructed a makeshift dam on the North Crimean Canal, which previously provided 85 percent of the local water supply. It connected the region to the River Dnieper, the fourth-longest river in Europe.

Following the reabsorption of Crimea into Russia, the same Kiev ordered the channel to be blocked off. The area is now suffering from a water shortage, with climate change and a lack of rainfall also having an effect.

“The right to water is a prerequisite for the realization of other human rights,” Alexander Lukashevich said on Thursday, noting a UN General Assembly resolution from 2010. “Depriving the population of access to water can be equated with an attempt at genocide.” (RT)

“In their statement, the co-chairs welcomed the progress achieved by the leaders of Azerbaijan, Russia,…

Iran says it could enrich uranium to 90% purity if it wanted to, but is ‘not seeking weapon’ as nuclear deal talks restart

The enrichment of weapons-grade uranium is within Iran’s reach, but it chose to stick to…