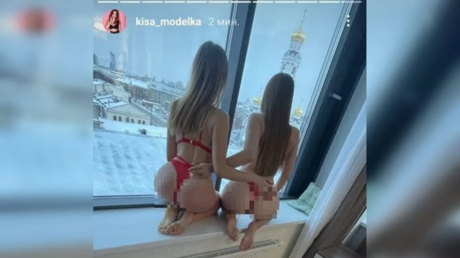 KP reported on Thursday that Kuznetsova’s racy photo session took place in her room in the hotel RentHouse, across the street from the Great Zlatoust Church in the city of Ekaterinburg, in Russia’s Ural region. The historic house of worship was first constructed in the 19th century, then destroyed by the Soviets in 1930, and rebuilt 80 years later.

According to KP, the photographs were meant to serve as a means of bartering for her stay in the hotel, but locals and other guests reacted with anger when the photos were posted on social media.

“We received hundreds of messages from guests whose religious feelings were hurt by the publication,” Dmitry Shabalkin, the hotel’s founder, wrote on Instagram. “We immediately took action, and even put together a ‘black list’ of people who might provoke a similar situation. And that means they will never become guests in our organization. As the face of the company, and as myself personally, I offer my apologies to the religious believers for insulting their feelings, and I warn possible ‘instadivas’ that we do not support such displays of their uniqueness.”

Shabalkin also explained that Kuznetsova had stayed in the hotel from December 18 to 20, and that she had received 50% off for her services, but claimed that he had had no knowledge of this deal and would investigate who had agreed to it.

Previously detected in the UK and Portugal, monkeypox has reportedly infected gay men in Madrid…