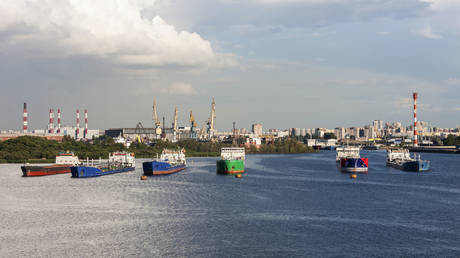 Shipments of Russian seaborne crude surged to 3.6 million barrels per day last week, reaching the highest since early June, while the less volatile four-week average is the highest since August, Bloomberg reported on Monday.

A total of 34 tankers were loaded with some 25.2 million barrels of Russian crude oil in the week to November 4, according to vessel-tracking data and port agent reports, as quoted by the media. That’s up by 3.2 million barrels.

The exports were ramped up more than a month before the EU sanctions, supported by the G7 nations and Australia, kick in on December 5. The penalties will see Western companies banned from providing insurance and other services to vessels loaded with Russian crude, unless the cargo is purchased below a yet-to-be-agreed price cap.

The biggest increase, in both volume and percentage terms, was reportedly recorded in shipments from the Arctic terminal of Murmansk. Cargoes carrying Russian oil are becoming more cagey about their destinations, according to Bloomberg. The agency noted a big jump in vessels showing their next destination as Port Said or the Suez Canal, and a drop in the volume on tankers indicating that they’re headed to India.

The media highlighted that many more ships carrying crude are leaving Russian ports without signaling a final port of discharge.

Russia’s revenues from crude-export duty reportedly rose by $16 million to $149 million in the seven days to November 4, with the four-week average income also increasing, gaining $6 million to $134 million.