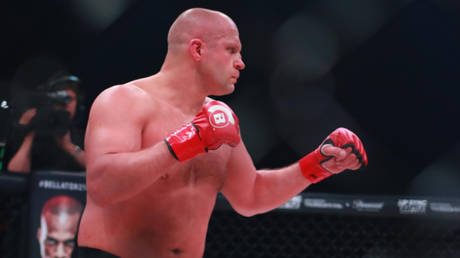 Former PRIDE heavyweight champion and Russian mixed martial arts pioneer Fedor Emelianenko has been admitted to a Moscow hospital which specializes in treating patients suffering from coronavirus, according to local reports.

Emelianenko, 44, is being treated at Clinical Hospital No. 52 in the Russian capital. News of Emelianenko’s admission to the medical facility was reported by RIA Novosti citing information given to them by the medical institution.

Specific details as to Emelianenko’s condition have not yet been made public.

Emelianenko is known to mixed martial arts fans as one of the most dominant heavyweight fighters in the sport’s history due to an unmatched run through Japanese promotion PRIDE which saw him capture their heavyweight crown and remain undefeated as he rampaged through the division, taking down fighters such as Mirko Cro Cop, Mark Coleman and Antonio Rodrigo Nogueira along the way.

The Russian great has most recently been a member of the Bellator roster and was last in action in December 2019, when he defeated fellow PRIDE alumnus Quinton Jackson by first-round stoppage. He came up short in his prior fight against Ryan Bader in a bid to capture the promotion’s heavyweight title.

Emelianeko’s run in MMA is notable for him having never set foot in the UFC octagon throughout his two-decade fighting career, though UFC boss Dana White did attempt to engineer a fight between Fedor and former UFC champion Brock Lesnar in 2012 before negotiations between all three parties broke down.

In addition to his numerous world titles in mixed martial arts, Emelianenko is also a nine-time Russian champion in combat sambo.

Since last March, more than 3.6 million coronavirus infections have been reported in Russia, with more than 66,000 deaths recorded. More than 20,000 new cases were identified on Wednesday.

The virus has ravaged global sport for several months now and has previously impacted the top level of Russian MMA as Abdulmanap Nurmagomedov, father and mentor to Russian champion Khabib Nurmagomedov, passed away in July due to complications from a Covid-19 infection. (RT)