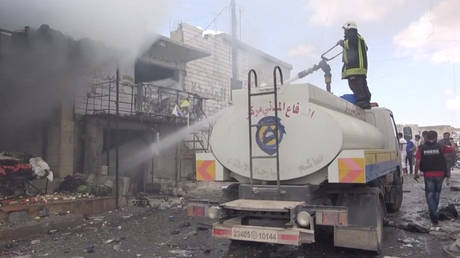 A damning report by the New York Times, which accused Russia of bombing four UN-protected hospitals in Syria, is a product of misinformation by Western intelligence services and jihadists, the Russian military said.

On Sunday, the leading US newspaper said it had irrefutable proof that Russian warplanes had bombed four sites in Syria, which it knew to be locations of civilian hospitals. The accusation stems from analysis of social media, interviews with witnesses, data provided by local plane spotters and records of communications of the Russian military deployed in Syria. The bombings, which happened on May 5 and 6, are just a faction of attacks on civilian infrastructure, for which Moscow carries responsibility, the newspaper alleged.

Responding to the accusation on Monday, the Russian military said Times report was flawed for several reasons, including failure to explain that Idlib Governorate, where the four alleged bombings took place, lives under rule of brutal jihadists. That detail affects the entire narrative, indicating its flawed sourcing.