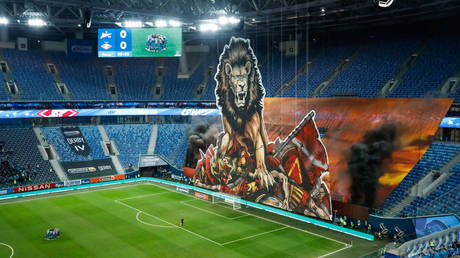 Russian football fans are protesting that football stadiums are “not prisons” after announcing that they will be shunning their beloved clubs’ matches in opposition to controversial new fan ID requirements which are due to be introduced in summer 2022.

Politicians moved in December 2021 to adopt the third and final reading of the bill to bring in the new system, which will reportedly cost around $10.5 million to implement, on June 1.

Supporters have already carried out protests including mass premature departures from matches over the plan, which includes measures to restrict them to buying tickets via a portal system that will hold their data.

Russian Premier League side Spartak Moscow’s vast Fratria group has announced an immediate boycott of games in response, with followers of reigning champions Zenit St. Petersburg and Rostov, who used to be managed by national team boss Valeri Karpin, said to be following suit.

“We are united in our position. We refuse to accept the rules imposed on us: passports, identifiers and the fan ID law,” Fratria said in a statement, suggesting that supporters who attend games in the league, domestic cup, European competitions and other games where a mandatory ID system is applied will be considered traitors.

“Our boycott starts from now and will last until the complete repeal of the adopted law.

“The boycott applies to all fan associations, organizations and teams that identify themselves with Spartak, Moscow, Russia, the CIS countries and the whole world. 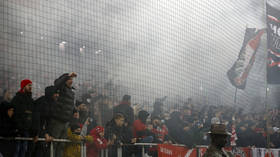 “Not a single law, not a single document and not a single official can deprive a fan of his sacred right: to be close to his club, to be part of its history, to consider the stadium and sector as his home, to openly express his emotions and opinions.

“In our blood, our ideology was, is and will forever remain the main principle – the support of our team.

“At any time, despite the results, restrictions, pressure from law enforcement agencies and other circumstances, we remained close to Spartak.

Individuals could be denied a Fan ID or have their documentation and permissions frozen for public order offenses at matches in Russia and abroad. 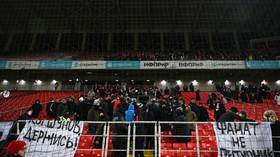 ‘A fan is not a criminal’: Why thousands of Russians are walking out of football stadiums

Shortly before the bill was passed, an incident at CSKA Moscow saw more than 400 fans detained by riot police after dozens of people set off flares.

Security personnel blocked an entire section of supporters from leaving in an attempt to identify those responsible following the mysterious hacking of stadium CCTV cameras, with fans said to have been led into waiting police vans hours after the final whistle.

Backers of the bill, such as politician and three-time Olympic figure skating champion Irina Rodnina, have argued that it needs to be implemented in order to identify people acting unlawfully and ensure people are safe inside stadiums.

Critics of the legislation have included RPL side Ural’s president, Grigory Ivanov.

Ilya Gerkus, a former president of Lokomotiv Moscow, reportedly called the boycotts “logical based on the dynamics of the situation” because he felt that law-makers had not carried out sufficient discussions with fans. (RT)