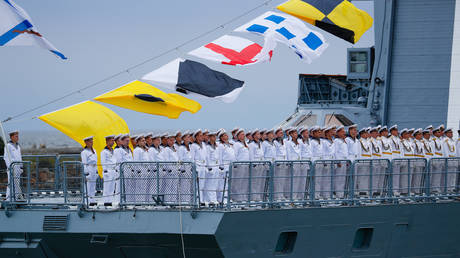 Sailors on the patrol ship 'Yaroslav the Wise' of the Baltic Fleet of the Russian Navy at the dress rehearsal of the parade in honor of the Navy Day in Kaliningrad. © Sputnik / Mikhail Golenkov

A proposal to rename and demilitarize Russia’s Kaliningrad region was ridiculed by its governor Sailors on the patrol ship ‘Yaroslav the Wise’ of the Baltic Fleet of the Russian Navy at the dress rehearsal of the parade in honor of the Navy Day in Kaliningrad. © Sputnik / Mikhail Golenkov

The governor of Kaliningrad has ridiculed a proposal from a former Polish defence minister to rename and demilitarise the Russian exclave.

Governor Anton Alikhanov told local media that the suggestion from Romuald Szeremietiew showed that the Polish official has no understanding of geopolitics, and accused him of competing in Russophobia with Poland’s Prime Minister Mateusz Morawiecki.

“They are expanding NATO, but it’s us who are supposed to demilitarize? I believe there is something wrong with the way Poles think,” Alikhanov said.

Szeremietiew, a conservative politician who briefly served as defense minister in the 1990s and later as a member of parliament, earlier gave an interview to Polish media, discussing Finland and Sweden’s bids to join NATO and Russia’s reaction, and also the future of Kaliningrad, a Russian exclave that shares a border with Poland.

“We must ask that Kaliningrad was no longer named after the criminal Kalinin, who is co-responsible for the Katyn massacre,” he said.

The Katyn massacre was the mass execution of some 22,000 Poles, most of them military officers captured by Soviet forces in Poland in 1939, on the orders of Joseph Stalin. The city of Kaliningrad and the region around it are named after Soviet official Mikhail Kalinin, who held several senior posts in the Bolshevik and Soviet governments. He was a member of the Politburo of the Communist Party, the executive body that in March 1940 gave the order to kill the Polish prisoners. Many Soviet documents detailing the atrocity were declassified long after the USSR collapsed.

In addition to renaming Kaliningrad, Szeremietiew also wants the Russian military to be disarmed there. The region is located on the Baltic coast between NATO members Poland and Lithuania, has no land link to mainland Russia, and serves as a key military stronghold for the country.

“This region must be demilitarized, because NATO cannot sit on a powder keg placed between its legs,” the Polish politician argued.

Szeremietiew welcomed the planned expansion of NATO into Sweden and Poland, saying it will strengthen the bloc – and by extension Poland – and turn the Baltic Sea into a “NATO Sea”. He predicted that Russia’s reaction to it would be limited to “howling” and threatening NATO allies with nuclear weapons, and that Ukraine would soon defeat Russian troops attacking the country, which would then result in the collapse and disintegration of Russia. (RT)