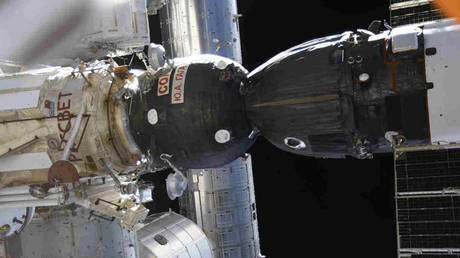 A two-person film crew, who became the first to shoot footage for a feature film in Earth’s orbit, are set to travel home from the International Space Station on Sunday. They also helped out with the regular work in space.

The Soyuz MS-18 spaceship, piloted by veteran cosmonaut Oleg Novitsky, is scheduled to undock from the International Space Station (ISS) at around 4.15am Moscow time (01:15 GMT). About three hours later, the return capsule is to land in a remote part of Kazakhstan, bringing home Novitsky and two historic space visitors.

Actress Yulia Peresild and moviemaker Klim Shipenko were picked for a pioneering collaboration between Russia’s television Channel 1 and the national space agency Roscosmos. During their 12-day stay on board the ISS, they filmed footage for an upcoming feature-length movie called ‘The Challenge’, in which Peresild stars. Some 35-40 minutes of screen time will consist of images taken in actual space. RT runs special coverage of the groundbreaking mission.

The film plot centers around a female cardiac doctor who is called to go into orbit and perform heart surgery on a cosmonaut who got stranded there due to a condition. Further details of the plot remain undisclosed.

Ironically, there was a medical experiment carried out on board the ISS. According to Roscosmos, professional members of the crew conducted a study of how a human heart adapts to low-gravity conditions.