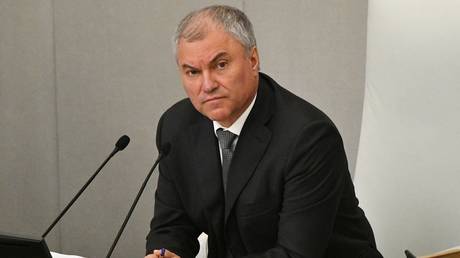 The Ukrainian government employs the same tactics as Al-Qaeda in its conflict with Moscow, Vyacheslav Volodin, the head of the State Duma, the lower house of Russia’s parliament, said on Monday.

Writing on his Telegram channel, Volodin compared Ukrainian President Vladimir Zelensky to Osama Bin Laden, the leader of the Islamist group behind the 9/11 terrorist attacks in the US in 2001.

“Washington released information 20 years ago that Al-Qaeda terrorists led by Bin Laden got access to radioactive materials and were planning to make a ‘dirty bomb,’” he said. “The threat of using such a bomb in the US and Europe had existed until Bin Laden was killed in 2011.”

The methods of nuclear terrorism have not changed: Those used by Osama Bin Laden are now used by Zelensky.

Volodin claimed that Kiev had instructed its nuclear scientists to make a ‘dirty bomb’, while its forces shell the critical infrastructure of the Zaporozhye and Kursk nuclear power plants. 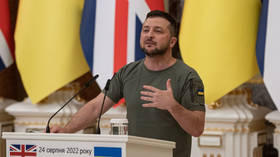 “Through financial and military aid to Zelensky’s regime, the US president and the heads of European countries are becoming the sponsors and accomplices in nuclear terrorism,” Volodin wrote.

The comments came after Russian Defense Minister Sergey Shoigu warned his British and French counterparts on Sunday about “a potential Ukrainian provocation” involving a ‘dirty bomb’.

Zelensky dismissed the allegations and accused Moscow of threatening the world with nuclear weapons. “If Russia alleges that Ukraine is preparing something, it means only one thing: that Russia itself is preparing it,” Zelensky said on Sunday.

Moscow and Kiev have accused each other of shelling the Zaporozhye Nuclear Power Plant, which was seized by Russian troops after Moscow launched its military operation in the neighboring country. Zaporozhye Region voted in September to leave Ukraine and has since been admitted into Russia. (RT)