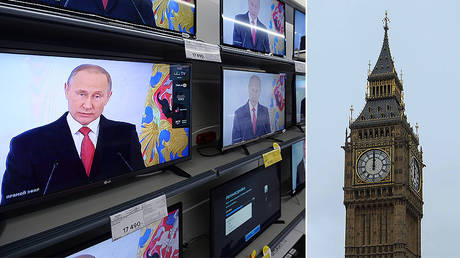 Much of the current Russia paranoia began with claims that Donald Trump was recruited by Russian intelligence years ago as a sleeper agent, and then given a leg-up into the presidency of the United States with the help of the GRU. The claims of ‘collusion’ were repeated over and over, and yet at the end of the day none of them could be substantiated. And where did it all start? In the now-notorious dossier assembled by former British spook Christopher Steele.

Steele, it has now been revealed, got his information from a guy called Igor Danchenko. He, in turn, got a lot of it from a former classmate, Olga Galkina, described as an alcoholic “disgruntled PR executive living in Cyprus,” and as such obviously a well-informed source with intimate knowledge of the Kremlin’s innermost secrets.

In short, the Steele dossier was a load of hokum, commissioned by a British Black PR operative and then fabricated by some random Russian emigres with no access to anything of value. And yet, millions believed it.

And then, we have the story of Brexit. Ever since the 2016 referendum which resulted in Britain leaving the European Union, we have been repeatedly told that the victory of the Leave campaign was made possible by ‘Russian interference’. Most significantly, it was claimed that the Russian government illicitly funded the Leave campaign by funnelling money through the campaign’s most significant financial backer, businessman Arron Banks.

Also on rt.com Driving Russia further into China’s arms: Incidents like ‘John McCain’ warship incursion near Vladivostok counterproductive for US

But it turns out that it was Cadwalladr who had a tricky relationship with the truth. Angered by her assertions, Arron Banks sued her for libel. Three weeks ago, she publicly backed down from one of her accusations. “On 22 Oct 2020,” she said, “I tweeted that Arron had been found to have broken the law. I accept he has not. I regret making this false statement, which I have deleted. I undertake not to repeat it. I apologise to Arron for the upset and distress caused.”

Read more:   Iranian President: "It is illegitimate to struggle against people's demands

This week, Cadwalladr went further. The judge in the libel trial ruled that the meaning of her statement that Banks had lied about his relationship with the Russians was that he had lied about taking money from Russia, and that she had intended this as a statement of fact, not a call for further investigation. In the face of this judgement, Cadwalladr withdrew her ‘truth’ defence and has been ordered to pay Banks’ costs relating to this aspect of the case. In doing so, she effectively conceded that she was not willing to defend as fact the proposition that Russia financed Leave via Banks. While Cadwalladr continues to fight the case using a ‘public interest’ defence, the withdrawal of the truth argument is a dramatic concession.

The Banks story is not the only problematic aspect of Cadwalladr’s reporting. The journalist earned international plaudits and a prestigious Orwell prize for her report on how the British firm Cambridge Analytica supposedly used big data dredged up out of Facebook to help both the Leave campaign and Donald Trump win victories in 2016. This too had a Russian connection. In a 2018 article for the Observer, Cadwalladr described how “Aleksandr Kogan, the Cambridge University academic who orchestrated the harvesting of Facebook data, had previously unreported ties a Russian university … Cambridge Analytica, the data firm he worked with … also attracted interest from a key Russian firm with links to the Kremlin.”

Others jumped on the Russia-Cambridge connection. “The Facebook data farmed by Cambridge Analytica was accessed from Russia,” claimed British MP Damian Collins, head of the House of Commons Select Committee for Digital, Culture, Media, and Sport. In this capacity, he then published a report outlining allegations of Russian propaganda and meddling in British affairs, including unsubstantiated insinuations that Russian money had influenced the Brexit campaign via Mr Banks. (RT)