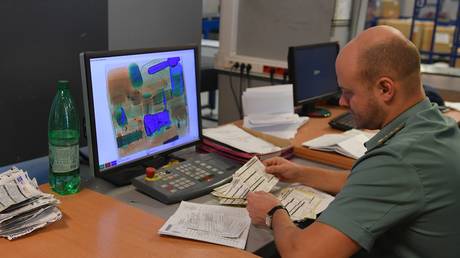 Russia might have its history of storming Berlin and winning World War Two, but that doesn’t mean there are no fascists at home. On Wednesday, officials revealed that citizens are regularly ordering Nazi paraphernalia from China.

Displaying symbols of the Third Reich is banned in Russia, except in specific research, artistic or educational instances.

The revelation came after officers in Novosibirsk’s postal customs office seized two parcels containing prohibited imagery, including a breastplate and crosses with Nazi symbolism. Novosibirsk is the largest metropolis in Siberia, and the region’s main transport hub. The packages, due to be sent to the far-eastern cities of Tynda and Khabarovsk, were uncovered using an x-ray machine.

The intended recipients were told to prove that they need the items for matters other than “the propaganda of fascist ideology,” or the parcels would be sent back to China. Accepted reasons for owning such objects include scientific research and “the preparation of materials to condemn Nazism.” (RT)