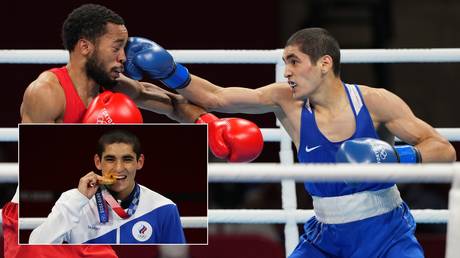 Albert Batyrgaziev made good on a promise to leave Tokyo with the gold medal as the Dagestani featherweight denied the US a first men’s Olympic boxing title in 17 years when he edged out Duke Ragan in their final.

Batyrgaziev won 3-2 on the scorecards at the historic Kokugikan Arena to land the Russian Olympic Committee (ROC) team its first boxing gold of the Games.

“He had a fighting spirit for the Olympics. He promised to win a gold medal, and he won it,” said Batyrgaziev’s proud father from back home in Russia.

In a tight three-round contest, four of the five judges separated the pair by just a single point, although an Indonesian official had the bout firmly in Batyrgaziev’s favor.

The Russian – who boasts a 3-0 professional record – was up against a former world championship silver medalist in the form of Cincinnati fighter Ragan, who was ultimately unable to land a first men’s Olympic gold for the US since Andre Ward in Athens in 2004.

At his post-fight press conference, the 23-year-old Ragan – who owns a 4-0 professional record – said he would be open to running it back with Batyrgaziev in the pro ranks for a shot at revenge. (RT)