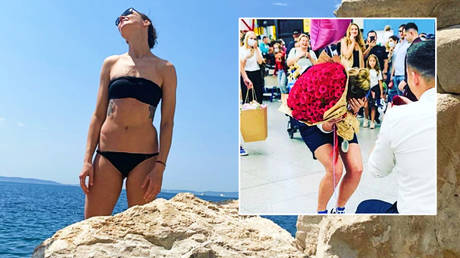 After an exceptional 3×3 campaign at the Tokyo Olympics that ended in a silver medal, there was more joy for Russian basketball star Anastasiia Logunova when she returned to Moscow to receive a ring from her boyfriend on arrival.

World Cup and European champion Logunova appeared to have been surprised by her lover minutes after touching down in Russia, coming back a hero after narrowly missing out on gold via an 18-15 defeat to Team USA in the final that included a star showing from the power forward.

Her smitten new fiance, who is a comedy performer and has served in the Russian army, has previously described their relationship as the “perfect match”.

“We seem to be from different galaxies,” he once wrote, describing them as “bright light and pitch darkness” and “two souls and one head.”

“No matter how fate interferes with us, I will not survive next to another.”

Logunova turned 31 while she was part of the heroic Russian team – competing as the Russian Olympic Committee due to a doping ruling – who came close to glory at the Games.

The Nadezhda Orenburg star described being at the showpiece in Tokyo as her “biggest present”, posing next to the Olympic logo at night on Toyomi Wharf.

Her sustained campaign thousands of miles from home kept her from sharing some of the romantic snaps she is known for on social media, posing with her partner in glamorous outfits and in front of landmarks while sharing kisses.

Instead, Logunova has spent her time helping her team mount a memorable Olympic challenge, finished second only to the USA in Pool A, in which they edged above China and Japan with five initial wins out of seven.

A 21-18 triumph over the host nation included six points from Logunova, who also scored twice in a 21-14 victory against China.

The former Dynamo Kursk and MBA Moscow player had her most productive performance in a 21-12 win over Romania, scoring eight points in a tally matched by Olga Frolkina. (RT)