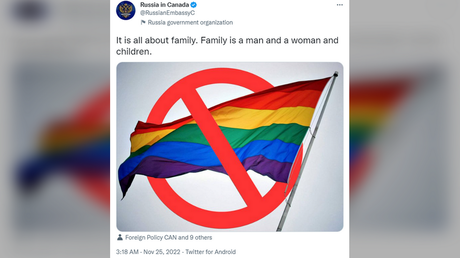 An image shared by the Russian embassy in Canada on November 25, 2022 © Twitter / @RussianEmbassyC

Moscow’s embassy has reminded Ottawa that a family is “a man, a woman, and children” An image shared by the Russian embassy in Canada on November 25, 2022 © Twitter / @RussianEmbassyC

The Russian embassy in Canada has blasted the country’s government over its opposition to a new law criminalizing the sp bans “propaganda” normalizing non-traditional relations, pedophilia, and gender reassignment, and passed the upper house of Russia’s State Duma on Thursday. Widely seen as a follow-up to a 2013 law prohibiting the sp the passage of the bill, accusing Russian lawmakers of creating “a climate of fear and intimidation” among LGBTQ people and “impacting the human rights of all in Russia.” The condemnation was signed by 33 other members of the ‘Equal Rights Coalition,’ a group of mostly Western nations dedicated to promoting gay rights around the world.

By opposing the bill, Canada is “deliberately distorting reality by conflating the concepts of individual sexual preferences and universal human rights,” the Russian embassy wrote on Twitter. “There is no discrimination in Russia with respect to the rights of sexual and other kinds of minorities,” the embassy continued. “However…a person’s freedom ends where another man’s freedom begins.”

“We believe that non-traditional relations propaganda…infringes the rights of the traditional majority of Russian citizens willing to protect themselves and their children from being imposed with precepts that are alien to their spiritual and moral values,” the tweet read.

It is all about family. Family is a man and a woman and children. pic.twitter.com/zJeONBDq0J

The embassy also posted an image of an LGBTQ rainbow flag with a strike through it, and the caption “Family is a man and a woman and children.” Another post showed a depiction of Adam and Eve, with the text “And yes, there are just two sexes/genders – a man and a woman, male and female.”

And yes, there are just two sexes/genders – a man and a woman, male and female. pic.twitter.com/b56NzNbbst

“In Russia you are free to be you and to protect your children while they are minors from being imposed and imprinted by aggressive propaganda,” read the caption to one more image, an Orthodox icon showing the Virgin Mary and Jesus Christ.

In Russia you are free to be you & and to protect your children while they are minors from being imposed and imprinted by aggressive propaganda. pic.twitter.com/VLDpTrli5E

When the Russian embassy was accused by Canadian Minister for Sport Pascale St-Onge of spreading “homophobic propaganda,” it responded by asking the minister “will you, please, explore and explain how you appeared in this world?”

Madame, with all due respect to your opinion, will you, please, explore and explain how you appeared in this world? https://t.co/4lawldBWiFpic.twitter.com/l4kCzDfvzV