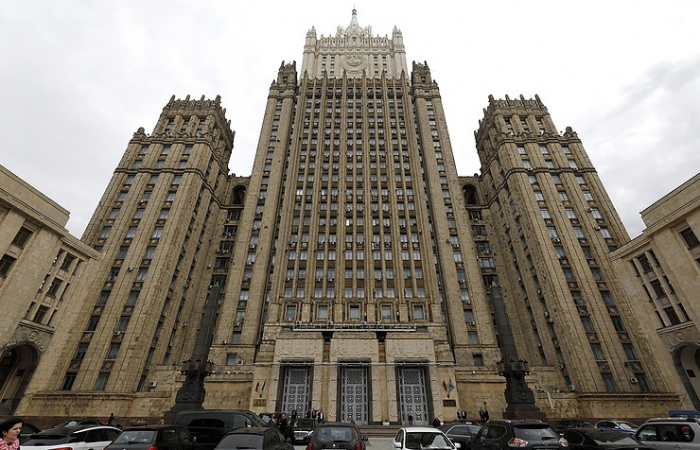 There were no meetings between Masis Mayilyan and Lernik Hovhannisyan, the so-called “representatives” of the illegal regime created in Azerbaijan’s Nagorno-Karabakh region occupied by Armenia, and officials of the Russian Federation, reads a statement by the press service of the Russian Foreign Ministry, Trend reports Nov. 8.

On Nov. 6, Russia’s Extraordinary and Plenipotentiary Ambassador to Azerbaijan Mikhail Bocharnikov was invited to the Azerbaijani Foreign Ministry, where Deputy Foreign Minister Khalaf Khalafov met with him.

At the meeting, the Russian ambassador was handed a note of protest of the Foreign Ministry in connection with the visit of Masis Mayilyan and Lernik Hovhannisyan to Russia.

In a response statement by the Russian Foreign Ministry, it was noted that the trip of these persons, even if it took place, was exclusively of private nature.

Read more:   Karabakh committee may be established in Azerbaijani parliament

As for the references to certain contacts between Mayilyan and Hovhannisyan with Russian experts in the “permanent representative office of “Artsakh” in Russia”, the Russian Foreign Ministry again emphasized that such an “office” isn’t registered in the state bodies of the Russian Federation as a diplomatic mission of a sovereign state because Russia doesn’t recognize the so-called “Nagorno-Karabakh Republic”.

The Russian Foreign Ministry emphasizes that, for its part, it will continue to contribute to the achievement of the Armenia-Azerbaijan Nagorno-Karabakh conflict’s settlement, both as part of the OSCE Minsk Group Co-Chairs and as an individual party to the negotiations process, taking into consideration its relations with Azerbaijan and Armenia.