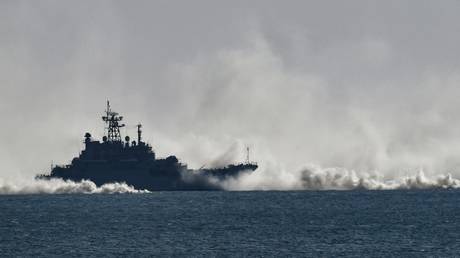 The Russian Navy Caesar Kunikov landing ship is seen during an amphibious assault exercise along the coast held by army corps and naval infantry units of the Russian Black Sea Fleet at the Opuk training ground near Kerch, Crimea, Russia. © Sputnik / Konstantin Mihalchevskiy

Launching a full-blown invasion of Ukraine is still on the cards for Moscow, Kiev’s foreign minister has said, after claims Russian troops could be preparing an offensive against the neighboring nation failed to materialize.

Speaking in an interview with Baltic news outlet Delfi on Monday, Dmitry Kuleba said that “in the worst-case scenario, the Kremlin could try to undermine the security architecture that has developed since the Cold War in Europe and redraw borders by force.” He cited the brief war between Russia and Georgia in 2008, as well as the country’s reabsorption of Crimea in 2014.

“Of course, Russia views invasion as one of its available alternatives,” he said. However, at the same time, he admitted that “there is no evidence that the decision on its implementation has already been made in Moscow, but the option is on the table.”

According to Kuleba, Russia failed to achieve all of its goals with Kiev in 2014, meaning that it will be no easy feat for Moscow’s military to march through his government’s country. (RT)