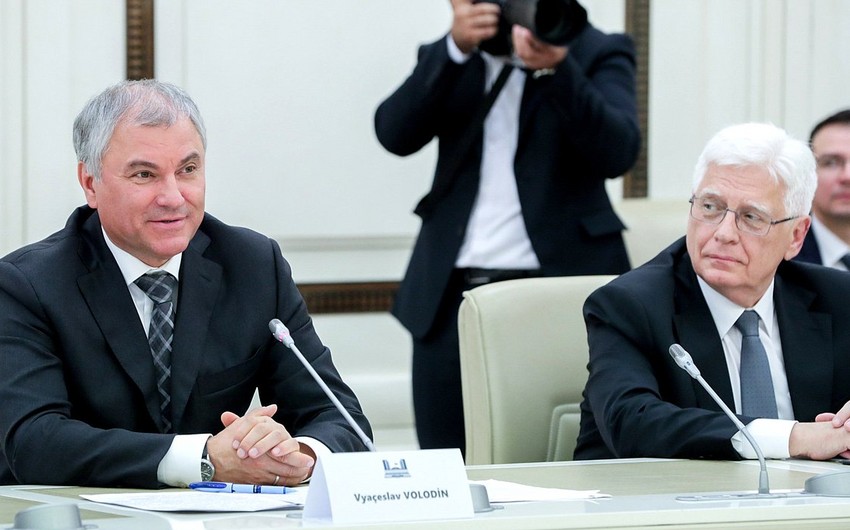 Chairman of Russia’s State Duma Vyacheslav Volodin has invited Chairman of the Azerbaijani Parliament Sahiba Gafarova to visit Russia before the end of the year, Report informs referring to the official website of the State Duma.

This was discussed during Vyacheslav Volodin’s meeting with Sahiba Gafarova as part of an official visit to Azerbaijan.

He also suggested signing an agreement on interaction between the State Duma and the Azerbaijani Parliament during this visit.

During the meeting, the parties discussed the development of bilateral relations, issues of trade and education. Thus, there was an increase in the trade turnover between the Russian Federation and Azerbaijan, which from January to June 2022 amounted to $1.67 billion and increased by 9.9% compared to the same period in 2022.

According to Vyacheslav Volodin, the deputies of the State Duma and the Azerbaijani Parliament need to intensify interaction in order to provide legislative support for the decisions of the heads of state, in particular the Declaration on Allied Cooperation.

“There are eight roadmaps as a result of the signed declaration. They need legislative support. It would be right if our relevant committees start working on these areas so that we contribute to this work,” said Vyacheslav Volodin.

“It is important that within the parliamentary dimension we have an agenda that implements the decisions of the heads of state. Therefore, it would be right to discuss new formats of interaction,” the chairman of the State Duma noted. According to Volodin, such a format could be a parliamentary conference of the Caspian countries to discuss strategic issues – security, shipping, ecology and environmental protection. The State Duma can prepare an appropriate appeal to the legislative bodies of the region’s countries.