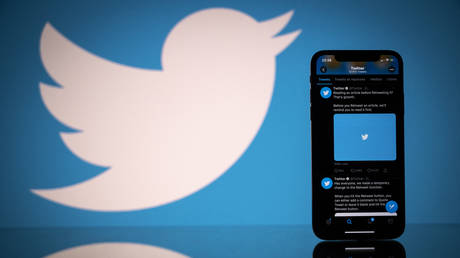 FILE PHOTO. In this file photo taken on October 26, 2020 this photograph shows the logo of US social network Twitter displayed on the screen of a smartphone and a tablet in Toulouse, southern France. © AFP / LIONEL BONAVENTURE

By not deleting banned material, Twitter has ‘maliciously violated’ Russian law. That’s according to media regulator Roskomnadzor, which has revealed that the tech giant has refused to remove 2,862 posts with illegal content.

On Monday, the watchdog revealed that it had sent the California-based company a combined total of 28,000 deletion demands, with around 10 percent being refused. These include 2,336 posts on suicide, as well as 352 containing pornographic images of minors.

According to Russian law, violating the rules governing the restriction of access to illegal content could see the firm hit with a fine of up to 8 million rubles ($110,000), with that amount increasing to one-fifth of the company’s annual revenue for a repeat offense.

Also on rt.com Russian Foreign Ministry says Twitter no longer independent social media, but a tool of ‘digital diktat’ under control of West

As of February 1, according to new Russian legislation, social networks are now required to identify and block the forbidden content themselves, and have an obligation to take immediate measures to restrict access to prohibited material. As well as posts that call for terrorism, promote violence, and call for unsanctioned protests, the law also includes content with bad language. (RT)