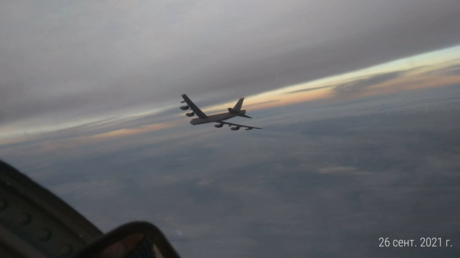 Russia’s Ministry of Defense has released a video of three Su-35S fighter planes escorting a US Air Force B-52H bomber over the waters of the Pacific Ocean on Sunday after it was spotted heading toward the country’s airspace.

According to the Ministry of Defense, the scrambled aircraft guided the US bomber away from the Russian border.

The Su-35, first completed in 2008, is a derivative of the Soviet Su-27, a supermaneuverable fighter aircraft designed by Sukhoi in the 1970s. Designed for intercepting and destroying all classes of aerial targets and air superiority, the Su-35 is commonly scrambled when foreign planes come near Russian airspace. It has also seen action in Syria.

Also on rt.com Plenty more subs in the sea: AUKUS nuclear deal could end up pushing Russia and China closer together but dividing Europe

The Boeing B-52 bomber, also known as the Stratofortress, is a long-range, jet-powered plane first introduced in the 1950s.

American bombers, as well as spy planes, are regularly intercepted and escorted away from the Russian frontier. While the confrontations are common, they rarely lead to a diplomatic incident. However, last year, the US Air Force complained publicly that Russian aircraft made an “unsafe, unprofessional” intercept of a B-52 bomber over the Black Sea, increasing “potential for midair collisions.” (RT)