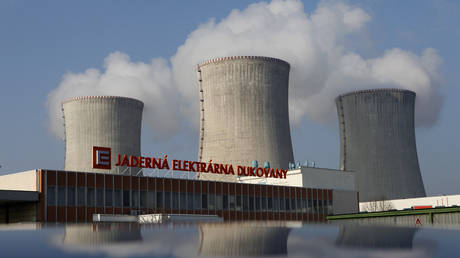 Russia’s Rosatom will likely be barred from tendering for refurbishing the Dukovany nuclear power plant, the Czech industry minister said, amid scandal over a 2014 munitions depot blast, blamed by Prague on Russian intelligence.

The Russian state-owned nuclear energy corporation will likely be kicked out of the pre-qualification round for the Dukovany project, Czech Industry Minister Karel Havlicek said on Sunday.

“I can’t imagine that Rosatom would be in the safety assessment at this moment,” he told local TV.

The move comes after Prague accused Russia’s military intelligence of being involved in an incident at a munitions depot in the village of Vrbetice, some 330km southeast of Prague, back in 2014. The depot was rocked by a series of explosions that killed two employees of a private company, which had been renting a warehouse from the military at the facility.

Prague opted to expel 18 Russian embassy staff over the country’s alleged involvement in the attack, while local police have also placed two Russian citizens on the wanted list over “serious crime.” The pair turned out to be Alexander Petrov and Ruslan Boshirov – the same two individuals, accused by the UK of “poisoning” former double agent Sergei Skripal and his daughter Yulia in Salisbury back in March 2018. The now infamous duo had previously denied any links to Russian military intelligence.

Given Havlicek’s statement, the contest for Dukovany project is now expected to shrink even further. Back in January, China General Nuclear was barred from participating in the pre-tender security assessment, in which companies are to describe their structure of bids and supply chain, as well as to address cybersecurity issues, among other requirements. Russia’s Rosatom, was allowed to take part in the assessment, as Havlicek described Russia as “key energy partner” back in March.

“Basically, we are all inclined to believe that China is unthinkable as a potential supplier for us in the tender,” said Havlícek. “At the same time, the political parties are divided in that certain politicians would like to exclude Russia as well, while others want it to remain.”

According to media reports, multiple security services of the EU and NATO countries had repeatedly urged Prague to bar the Russian corporation from taking part in the contest. (RT)