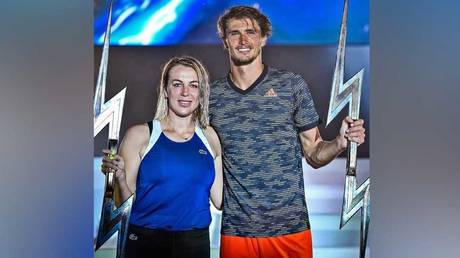 Russia’s Anastasia Pavlyuchenkova has been crowned the first ever women’s champion of the Ultimate Tennis Showdown (UTS) – the fast and frenetic exhibition format set up by Patrick Mouratoglou, longtime coach of Serena Williams.

World number 30 Pavlyuchenkova prevailed in Sudden Death in Sunday’s final against France’s Alize Cornet, in what was the second edition of the UTS but first to feature women.

The Russian had overcome Tunisia’s Ons Jabeur in the semi-final of the short-format version of the game, where players face each other but also the clock in a race to win the most points during each quarter of a 40-minute match.

Players are also given various ‘cards’ to play throughout the match which can add bonus points of differing types depending on when they are deployed.

Last weekend’s tournament at Mouratoglou’s academy in the South of France was the second edition of the UTS but the first to feature women.

Pavlyuchenkova – nicknamed ‘Thunder’ for the event, where players also chose monikers to add spice to matches – finally saw off ‘Volcano’ Cornet in Sudden Death after the Frenchwoman had battled back from two quarters down.

Even though not recognized as an official title, the 29-year-old Russian was delighted with her ‘Lightning’ trophy, which matches a tattoo she has on her neck.

“I was p*ssed because I was up 4-0 in the third quarter… I was feeling good, playing well… But she came back. I’m glad I won the set, it was crazy, I was so nervous,”said the Samara-born star.

“I think it could be the future,” she added of the unique UTS format. “Because it’s short, entertaining, fun to watch.”

Both Zverev and Pavlyuchenkova will be thankful for some additional practice as they gear up for the return of the women’s WTA and men’s ATP tours.

The WTA restarts with an event in Palmero, Italy, on Monday, while the men’s tour is set to return later in August ahead of the US Open.

In launching the UTS earlier this, Mouratoglou – who has helped guide Serena Williams to her incredible haul of 23 Grand Slam titles – enlisted the likes of boxing icon Mike Tyson to hype the event, who said it was “like the UFC of tennis.” (RT)

SCO expresses concern on exacerbation of situation around Karabakh conflict

Armenia, having violated the ceasefire regime, began another military aggression on September 27 and fired…

Washington boasts about defeating Islamic State, but instead, it vanquished the terrorist group’s most formidable…

Due to the provocative nature of the military-political leadership of the Republic of Armenia, the…

The ongoing fighting over disputed Nagorno-Karabakh is unlikely to end up in a blitzkrieg, a…