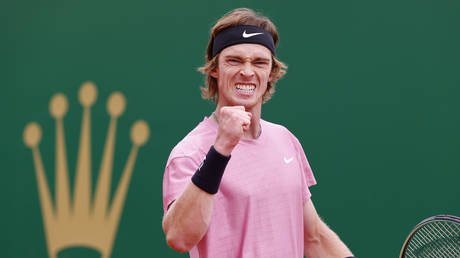 Rublev is into the final in Monte Carlo. © Reuters

Andrey Rublev continued his strong start to the season as the rising Russian star swept past Norway’s Casper Ruud in straight sets in Monte Carlo to book a first Masters 1000 final against Stefanos Tsitsipas of Greece.

Fresh from his sensational upset victory against 11-time champion Rafael Nadal on Friday, Rublev dug deep to overcome Norwegian surprise package Ruud, 6-3 7-5, at the Monte-Carlo Country Club after recovering from a break down in each set.

For Rublev it was a 24th victory this season, meaning the 23-year-old Russian has racked up a better record than any other player on the ATP tour thus far this campaign.

“It is an amazing feeling. It is my first [Masters 1000] final, so I am really happy,” Rublev said in post-match comments. “We will see what is going to happen [in the final]. I’ll try to do my best.”

The man Rublev faces next is Greek star Tsitsipas, who booked his spot in the final with a straightforward win over British underdog Dan Evans, 6-2 6-1.

For fourth seed Tsitsipas, Sunday’s showdown on the Mediterranean coast will be a third Masters 1000 title match, with the 22-year-old having reached the same stage in 2018 in Toronto and 2019 in Madrid – both of which he lost.

A new ATP Masters 1000 champion will be crowned! 👑Who will it be? #RolexMCMasterspic.twitter.com/eriOfwlprJ

The head-to-head record between Rublev and the Greek is level at three wins each from their six encounters, including one win apiece on clay.

Sixth seed Rublev, though, has been in formidable form this season, winning the Rotterdam Open at the start of March to give him an eighth senior career title overall.

The Moscow-born star has picked up where he left off in 2020, when he won a tour-leading five titles in the space of 12 months.

Rublev is already guaranteed to pass Roger Federer in the rankings and rise to world number seven, while victory in his maiden Masters 1000 final would also see him pass Germany’s Alexander Zverev and move to sixth. (RT)

OPEC announces outlook for production of liquid hydrocarbons in Azerbaijan