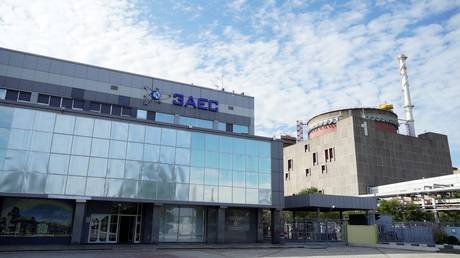 A general view of the Zaporozhye Nuclear Power Plant in Energodar. ©  STRINGER / AFP

Ukraine has accused Russia of an eco-disaster at the Zaporozhye NPP while itself shelling the plant, a senior local official said A general view of the Zaporozhye Nuclear Power Plant in Energodar. © STRINGER / AFP

Kiev’s accusations that Moscow is responsible for an alleged environmental disaster at the Zaporozhye Nuclear Power Plant sound hypocritical, given that Ukraine has been constantly targeting the facility, Vladimir Rogov, a member of the administration of Russia’s Zaporozhye Region, said on Tuesday.

His statement comes after the Ukrainian state-owned operator, Energoatom, claimed that Russian actions had led to a massive die-off of fish in the facility’s cooling pond.

Rogov denounced Kiev’s accusations as the “wildest hypocrisy that knows no bounds.” “Ukrainian troops are shelling the region almost on a daily basis, threatening the lives and safety of people, but they keep silent about it, while expressing concerns about the fish,” he told RIA Novosti.

Moreover, he noted that the plant’s energy units had been shut down precisely because Kiev’s forces have been constantly targeting the area around the facility. 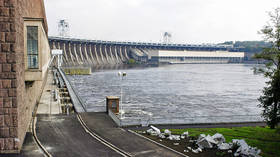 On Monday, Ukraine’s Energoatom said that the shutdown of the plant’s energy units had resulted in a decrease in the water temperature in the cooling pond, which led to “mass fish death.” The fish had been “performing a sanitary function” by destroying the green algae and cleaning the cooling tubes of the turbine condenser, it said.

However, Ukraine had gone to great lengths to paralyze the plant’s operations and prevent it from coming online again, according to Rogov.

The Zaporozhye Nuclear Power Plant, which is Europe’s largest, has been under Russian control since March. Last month, Russian President Vladimir Putin officially placed the facility under Moscow’s management. The Russian leader signed the relevant order as Moscow was finalizing the accession of Zaporozhye and Kherson Regions, as well as the Donetsk and Lugansk People’s Republics, to Russia following referendums that overwhelmingly supported the move.

Russia has on numerous occasions accused Ukraine of shelling the Zaporozhye facility, warning that the attacks could lead to a nuclear disaster. Kiev has denied the allegations, blaming Russia for the shelling instead. (RT)