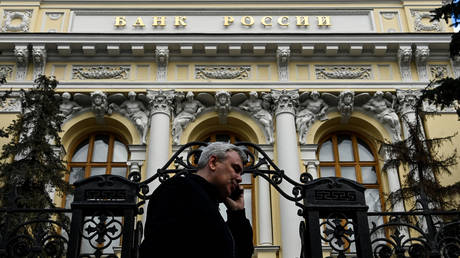 The current account – which measures the difference between outgoing funds and money coming into the country through trade, investment and transfers – grew by almost 86% year-on-year in 2022 to $227.4 billion, the regulator’s preliminary data showed.

The central bank said soaring commodity prices throughout 2022 had helped push the current account balance higher, while imports slowly recovered in the second half of the year.

“The value of imports of goods and services was reduced,” the regulator said. “Nevertheless, the decline in imports observed in the first half of 2022 compared to last year’s indicator was replaced by their gradual recovery.”

Russia’s foreign trade surplus in goods and services also surged by 66% from $170.1 billion in 2021 to $282.3 billion last year, reaching a historic maximum for the second straight year.

It comes as Moscow has rerouted the bulk of its trade flows eastwards after Western sanctions largely disrupted supply chains with European markets. Trade between Russia and China soared by nearly a third in 2022 to over $190 billion, according to China’s customs data.