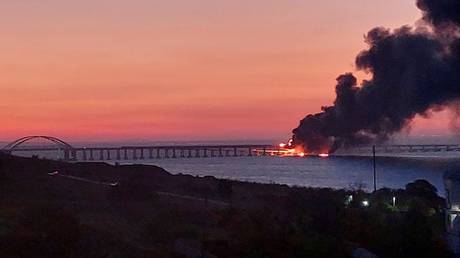 Smoke rising from a fire on Crimean Bridge on October 8, 2022 © Sputnik / Elena Ivanova

The mastermind of the operation was the head of Ukraine’s military intelligence, Russia’s FSB security service has alleged Smoke rising from a fire on Crimean Bridge on October 8, 2022 © Sputnik / Elena Ivanova

Russia’s domestic security service, the FSB, has announced arrests over the attack on the Crimean Bridge. It has also revealed details of the alleged Ukrainian terrorist plot, including its mastermind.

The agency accused the Ukrainian Main Intelligence Directorate (GUR) of the Ukrainian Defense Ministry of being behind the explosion, which damaged the strategic structure last Saturday. It claimed that Commander, Kirill Budanov, was personally responsible for the operation.

Russia has identified 12 individuals as suspected accomplices in the plot and has arrested eight of them, the FSB said. The list of people in custody includes five Russians and three foreigners, who have citizenship of Ukraine and Armenia.

The FSB claimed that the deadly cargo came from the Ukrainian city of Odessa. The explosives were disguised as rolls with plastic construction film, which were shipped on pallets and weighed 22,770 kg, the statement said.

Investigators said the shipment left Odessa in August and went through Ruse, Bulgaria, to Poti in Georgia. It was then moved to Armenia, a country which has a free trade agreement and a relaxed customs regime with Russia. It was then imported into Russia via Georgia on October 4, according to the timeline.

The transportation paperwork identified a non-existent firm in Crimea as the final recipient, according to the Russian agency. But the set of documents was only the latest of several used to disguise the movement of the cargo, it added. 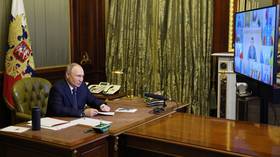 An agent of the GUR, known as ‘Ivan Ivanovich’ controlled the progress of the shipment, the FSB claimed. He used an anonymous ‘virtual’ phone number for communication as well as a second regular mobile number, linked to a Ukrainian citizen, it revealed.

“The investigation continues. All organizers and accomplices in the crime, including foreign citizens, will be held accountable,” the agency stressed.

At least three people died in the bombing of the bridge, including the truck driver. A fourth body that may be related to the incident was reportedly discovered this week. The blast also damaged the road section of the bridge and set on fire oil tanks on the parallel railroad line.

Kiev stopped short of officially claiming responsibility for the explosion, but many Ukrainian officials cheered the attack in various ways. The national postal service even announced a special stamp dedicated to the incident and had a large copy installed in Kiev for people to take selfies in front of.

Aleksey Danilov, the secretary of the Ukrainian national security council, posted images of the explosion next to Marilyn Monroe’s iconic performance of ‘Happy birthday to you’ for US President John F Kennedy. The explosion happened a day after Russian President Vladimir Putin celebrated his 70th birthday.

This week, Moscow retaliated to the attack and other alleged Ukrainian plots against Russian infrastructure by launching dozens of missiles on key Ukrainian energy sites. Kiev reported on Tuesday that 23 people were killed and over 100 injured in the barrage.