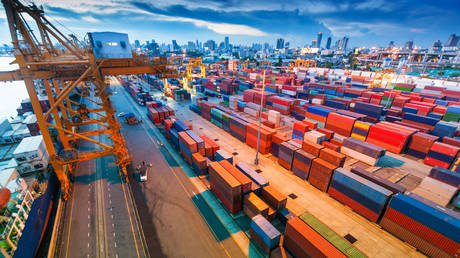 The countries of the Russia-led Eurasian Economic Union (EEU) uphold market economy principles in order to deepen cooperation within the bloc, Russian President Vladimir Putin said on Friday at a summit in Bishkek, Kyrgyzstan.

At the EEU gathering, he met with the leaders of Armenia, Belarus, Kazakhstan and Kyrgyzstan.

“We [the EEU] do not close anything, unlike some other countries. We do not violate the principles of a market economy; we do not impose any restrictions on each other,” Putin said.

The Russian leader stressed that on the contrary, the parties do everything to support free movement of capital, goods, and labor, which is “important” to them.

He noted that unemployment in EEU countries is lower than in other parts of the world.

“Such a result comes from the fundamental foundations of our economies, including Russia’s … as well as from the decisions we make,” Putin said.

The EEU, which is based on the Customs Union of Russia, Kazakhstan, and Belarus, was established in 2015. It was later joined by Armenia and Kyrgyzstan. In 2016, Vietnam officially became the first non-regional country to become a member of the bloc.

More than 50 countries and international organizations, including China, Indonesia, Jordan, Thailand, and some South American countries, have expressed an interest in striking a free-trade deal with the EEU.