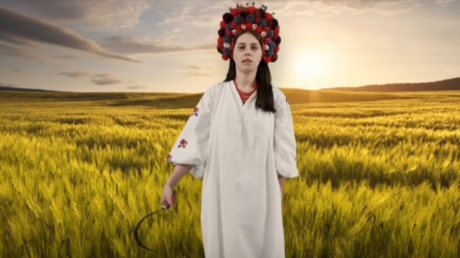 The disturbing video features a mock execution of a Russian soldier

The controversial video emerged on social media over the weekend, promptly sparking outrage in Russia. The advertisement features a woman, apparently portraying Ukraine, delivering a hateful speech against Russians with a ‘prisoner’, donning clothes resembling Russian military uniform kneeling by her side. The actress accuses Russian “pigs” of mocking, oppressing and killing Ukrainians for a long time and states that now the situation has changed.

“They’ve been until something terrible woke up among the peace-loving and grain-growing nation. Something that has been dormant for centuries in the bowels of the Dnieper banks. Primordial and antique Ukrainian god. And now we’re reaping a bloody harvest. Death awaits you all,” the actress states, ‘slitting’ the throat of the ‘prisoner’ with a sickle. 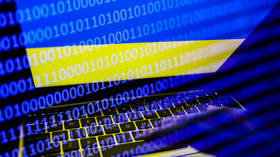 The woman also vowed revenge for the northwestern Kiev suburb of Bucha, as well as for other Ukrainian towns and cities that allegedly suffered at the hands of Russian troops. Ukraine accused the Russian military of massacring civilians in Bucha early in April after Russian troops withdrew from the area. Moscow denied any involvement into the deaths, insisting the whole Bucha affair was a staged “provocation” by Kiev to frame the country’s military.

The woman starring in the video has been identified as Andrianna Kurilets, a small-time professional actress from the Ukrainian western city of Lviv. The questionable ‘fame’ and media attention, however, have apparently done no good to the actress, as she deleted her social media profiles amid the fallout of the ad’s grand premiere.

Apart from the outrage online, the role fetched Kurilets a criminal probe by Russia’s Investigative Committee. The actress voiced “calls for violence against officers of the Russian Armed Forces”, the committee said in a statement on Monday. (RT)