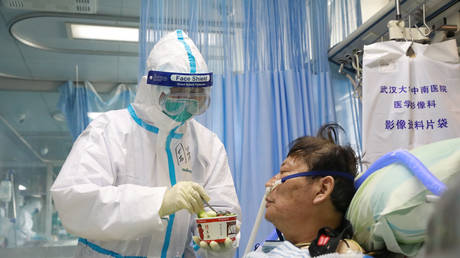 Not satisfied with just blaming Russia for election meddling, US officials are now claiming Moscow is trying to “sow discord” by spreading disinformation about the coronavirus and the US’ role in its creation and global response.

US State Department officials are claiming Moscow is behind an internet campaign to blame the coronavirus on the US government.

Without citing specific examples, officials told AFP that the foreign nation is using “false personas” to spread conspiracy theories about the virus, including that the virus is the US’ attempt to “wage economic war on China” and that it could be a biological weapon deployed by the CIA to “spread anti-China messages.”

The messages are apparently spread through thousands of online accounts, run by people and not bots, which post similar messages in multiple languages and can be “linked back to Russian proxies.” The unknown number of accounts all received “carte blanche” from the Russian government to say whatever they can to damage the US’ reputation, the report claims.

Read more:   WSJ: Dollar's role in the Russian economy has been shrinking

Philip Reeker, the acting Assistant Secretary of State for Europe and Eurasia, says Russia’s intent in this loosely-detailed effort is to “undermine US institutions and alliances from within.”

Also on rt.com ‘Totally sane’: Dems can’t make up their minds about who is a supposed ‘Russian agent’. Trump? Bernie? Or… both?

The disinformation campaign was supposedly flagged in mid-January, with even media companies like RT and Sputnik being named as part of the effort to push anti-US messages in relation to the virus.

“The Russian strategy is to very cheaply but very effectively take advantage of the information environment to sow discord between us and China, or for economic purposes,” said Special Envoy Lea Gabrielle, head of the Global Engagement Center, which is supposed to identify and combat propaganda. Why Russia needs to “sow discord” between the US and China, when Washinton has been doing it successfully over recent years was not explained. Relations between the two countries have already soured due to Trump’s trade negotiations, imposed tariffs and even labeling the country a “threat to the world” before the coronavirus ever became a situation.

Read more:   China has agreed to buy up to $1.2 trillion in US goods: CNBC

The State Department also blamed this campaign of “Russian talking points” for slower responses to the coronavirus in Africa and Asia.