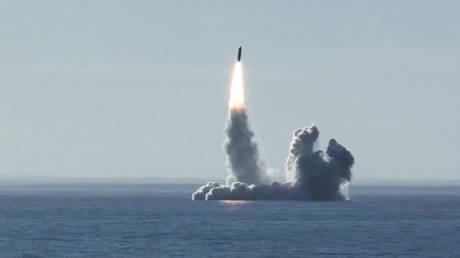 Moscow’s Ministry of Defense has announced that a nuclear submarine successfully launched a ballistic missile from in the White Sea, close to the Arctic Circle, marking the latest in a series of Russian naval rocket-firing tests.

On Thursday, officials revealed that the Knyaz Oleg submarine had completed its final stage of technical assessments after launching a Bulava missile. The rocket took off from the White Sea, an inland body of water close to Scandinavia, and was confirmed to have struck ground at the Kura firing range in Kamchatka, more than 6,000 kilometers east of Moscow.

“The strategic missile cruiser Knyaz Oleg, as part of the state test program, fired a Bulava ballistic missile from the White Sea. The rocket was launched from a submerged position at the Kura training ground in Kamchatka,” the military department said in a statement, adding, “the missile warheads have successfully arrived in the specified area at the estimated time.”

Read more:   Mexican pianist: I love Gara Garayev's works most of all

The nuclear submarine is reportedly set to be battle-ready in the Russian Navy by the end of the year, joining another four submersibles already deployed.

The news comes just weeks after the country’s military announced the successful test firing of a Zircon anti-ship hypersonic missile. The projectile has been designed to hit enemy surface ships, such as frigates and aircraft carriers, as well as ground targets located within the range of the missile. Zircon’s velocity, up to nine times faster than the speed of sound, makes it difficult for it to be stopped by any anti-aircraft systems. (RT)