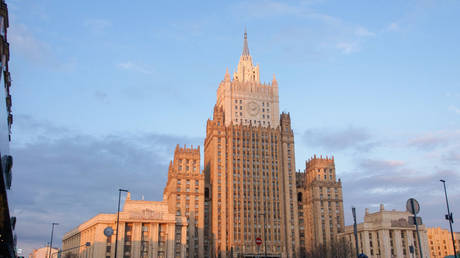 The measures were in retaliation for similar moves made previously by France, Spain and Italy © Getty Images / SOPA Images / Contributor

The Russian Foreign Ministry has declared dozens of French, Italian and Spanish diplomats ‘persona non grata’ in response to the expulsion of Russian diplomatic staff from these countries amid Moscow’s ongoing military offensive in Ukraine.

On Wednesday, the ministry summoned the ambassadors of the three countries to express “strong protest” over their countries’ “provocative” actions.

“It was emphasized that this step causes serious damage to Russian-French relations and constructive bilateral cooperation,” the Russian ministry said in a statement.

“They are ordered to leave the territory of Russia within two weeks from the date of delivery of the corresponding note to the Ambassador,” the ministry said.

Read more:   US inks trade agreement with Canada and Mexico at G20 summit

In response to the expulsion of 27 Russian diplomatic staff employees from Spain, Moscow has blacklisted a similar number of staff from Spain’s embassy in Moscow and consulate general in St. Petersburg. They must leave the country within a week of the date of the announcement. (RT)